Well, summer is just about over, and I'm back to my day job, teaching high school kids. That doesn't mean the fishing is done! The last few weeks have been spent getting those jobs done around the house that I put off due to fishing, getting ready for classes, and occasionally running out to catch a few fish in the sound. With an abundance of smaller blues available right off of Race Point, I've been having a blast with the fly rod. I've been keeping an eye out for those V tails and green flashes, Zoom Flukes at the ready, for those albies. Maybe this weekend. Also eagerly awaiting a call from Capt. Jack Sprengel of East Coast Charters, telling me it's time to go gunning for some bluefin on standup spinning gear. As always, I'll be fishing in September with Capt. Jack Balint, so the fall run is just approaching! Hoping to put up some pretty impressive posts over the next month or so. Check back! Just a quick little look at the snapper blues that have inundated the LIS. These little guys are just as aggressive as their larger siblings, and make for great light tackle or kids fishing. When I say light, I mean take that ultra-light trout rig out there and really have some fun.

Fishin' with Capt. Jack and our newb Bill 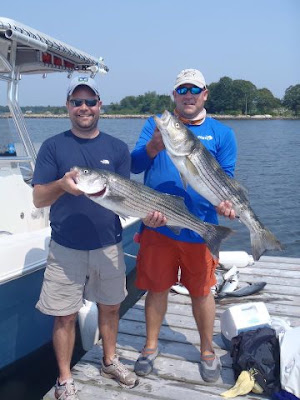 Went out with Jack Balint from The Fish Connection, Dave and Bill this morning. Was hoping to see some bonito, and ready for lots of blues on light tackle. Fishing was about as smoking as it gets this time of year. Started out in the Watch Hill area picking up some blues early as the flood was starting, but not much, so we moved to the Race around Valiant Rock. Lots of blues (as you could imagine), including a few big choppers. The bluefish action was steady until late in the flood, when we began seeing large numbers of good sized bass mixing in on top, right in the edge of the rip. Blues were faster to just about everything, but Bill pulled one nice keeper and we had a few shorts. There were some big tails and dorsals rising up chasing the squid that were flooding through. Water was really clear and you could see stripers cruising through and slurping up squid, ink clouds all over the place. As soon as the tide went, so did the squid, etc. Four straight hours of catching blues on light gear, with a bonus of some top water stripers in August, makes for a good day. Jack decided to swing back east of Fishers before calling it a day, just to take a looksy. The ebb tide was already starting to move, and we noted small schools of bait coming out of the water. Bill flipped out and immediately had a blue on. I spotted a school of stripers that was holding an area and just waiting for the bait schools to wash down. It was easy to tell they were holding to their structure as one large fish had a pink plug buried in it's back, and kept flashing past us every 5 minutes. I landed a nice 20+ pounder and a ton of shorts. You could again see some big fish mixed in with the schoolies. It was tough to call it a day, but as it was I was two hours late getting home to our sitter. Thanks to Jack, Bill and Dave. Helluva fun day out. Dave took a bunch of pics and some video that I will get up later and post on my blog. I was too busy catching fish!

Hot weather and typical August fishing have made me kind of lazy, thus the lack of recent updates. I just posted a story about high water temps in the LIS causing the Millstone reactor to shut down (See below). I'm not surprised. It's caused a lot of fishing to slow down as well. I took the kids out in Branford Harbor and around to Killim's Point last week and had a mid-day skunking on the porgies! The Niantic area has been much better for porgies, small bass and fluke to keep them busy. On a positive note, Blaine Anderson has posted some nice Facebook pics of bonito caught in the Fisher's Island area. I'll be headed out that way Friday morning. Hope they're still around!

Dropped by my local slime pit (Hanover Pond) the last week in-between thunderstorms. This pond is right down the river from me, so I drop by pretty often to throw in a line. It's good early season for bass as it is shallow, and by summer is full of slime. Still decent for throwing frogs, which is what I was doing as a storm rolled in. Only had about 20 minutes to work the west bank (heavily fished all season). After a few dozen casts of my green pumpkin frog with nothing, a bolt of lightning announced the end of the evening. I threw out my last Hail Mary cast and saw a boil and wake about six feet away and heading towards it. Gave it a twitch and my line was heading sideways. Set the hook and hauled in a nice fat bass with about 5lbs. of slime as well. 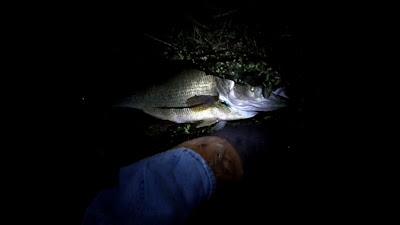 Yesterday I went out with my buddy John on a quick trip to fish Black Pond in Meriden/Middlefield. Set off a bit after noon, so wasn't expecting much this time of year. Wasn't a bad afternoon, as we hooked a few decent bass and some little guys, all dragging frogs across lilly pads. Secret is to wear camo that matches the fish so you can sneak up on them :) Sure beats mowing the lawn!

All in all, still some decent fishing to be had, despite the low water levels and high temperatures. 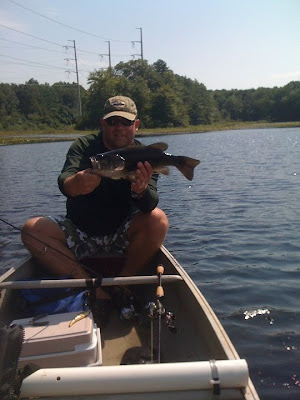 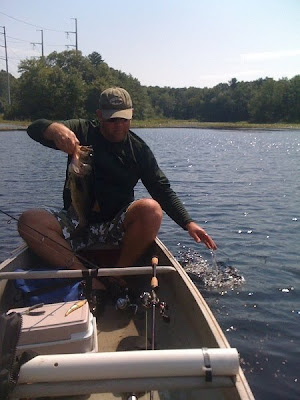 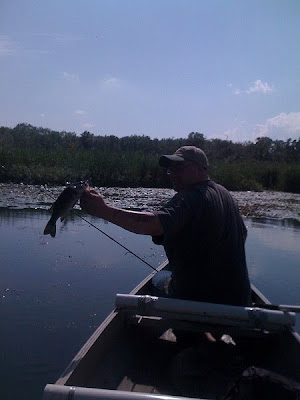 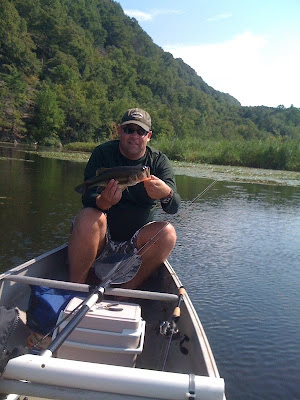 Warm Seawater Forces Millstone Plant Shutdown
Posted by RNA at 12:08 AM No comments: