Local bassin' has been good. Most of the shallow ponds are covered with snot, which is OK because it scares some potential anglers away. This time of year, the banks are fished to death in the easily accessable areas. No worries, just take anything that will float out of casting range and target those bass that are hanging in the grass beds. I could fish most of the shallow ponds around here all year Dean Rojas style. Give me a pumpkin frog and I'm good to go.

Some fishing from around Harkeness, including a few tips. Sorry for the vid bouncing, first time with the I-Kam. 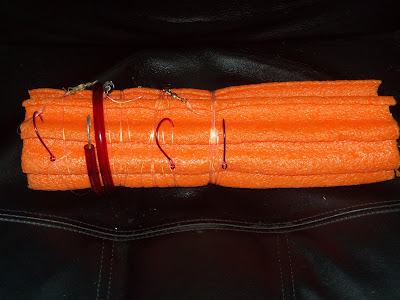 Cabelas and other shops sell devices to store hooks with long leaders, 3-way rigs etc. Here's the RNA answer. Your kid won't even know his/her float tube is a foot shorter!
Posted by RNA at 1:07 PM No comments:

I've finished the school year, and Tuesday was my first day of summer. I decided to kick off my season with an early am trip down to Niantic. I put in at about 3:00 on a tide coming in until 7:30. The plan was to fish eels off of Harkness pre-dawn, but Things got a bit sidetracked as I caught two keepers on a few trolling runs (tube and worm) right in Niantic Bay. The second was 37", 20+ lbs. Still determined to fish Harkness, I began the trip over about 4:45. Watched a cool sunrise passing by the power plant, and began working my way up Seaside, along the jetties by the sanatorium, and eventually to Harkness/Goshen Point. By the time I reached Harkness it was about and I had not caught any more fish. Finally caught a schoolie, but I was on the slack tide. I was getting picked apart by scup. Should have stayed where the fish were biting!

I tried out my new I-Kam Extreme glasses, and learned a few things. They don't work at night without a lot of artificial light. I also didn't realize how much I am constantly scanning around while fishing. I'm always on the lookout for indications of fish, be it birds, bait schools, rips, etc. This kind of gets annoying when watching the I-Kam footage. The wind also gets picked up a lot in the audio. However, the quality is on par with a Flip video, and the first person perspective is pretty cool. I hope to wear them while fighting some bigger fish in daylight hours.

Anyway, a decent start to what I hope will be a productive summer of fishing!

Started out on the Housie Friday evening for a low tide scouting trip. First the area for the first time last Monday, and wanted to get a better idea of the layout. Put in at Stratford. Didn't realize the launch was not state owned and picked up a nice $100 fine for not having a town permit. Won't be putting in down there any more this year. Better for wading than using my little boat anyway. Not worth the hassle of trailering down there. Went out Sunday from Stonington with Jack Balint who runs The Fish Connection in Preston. We fished the reefs from Sugar in to Fishers. No winches and broomsticks, all light tackle. G. Loomis and Shimano 8-17lb., 7'ish rods, 12-16lb. mono. Makes a 15lb. bass seem like a lot of fight. Kept 2 nice bass in the low 30's for fillets. Had a total of six, and about as many broke off or spit the hook. Jeff had a handful as well, so it was a pretty fun day.

Went to the mouth of the Housie last night. Fished a few locations, but found bass out the ass in one marsh area that I shall remain unusually cryptic about due to restricted access. There wer 30+ inch bass breaking the surface all around us just after sunset. Tons of bait. Problem was getting the bass to hit anything. A flyfisherman might have had a chance, but these were BIG bass ignoring all of our Gag's Poppers, sluggos, swim baits and everything else we threw. I had a school of bait swim right past me with a large striper's wake following behind. I was so frustrated I literally smacked at the back of the striper with my 7 ft. pole. It was that close. In the end I got skunked with probably 100 keepers within casting distance. Of course I left the eels and sandworms at home as we were planning to wade. Still made for an exciting evening.
Posted by RNA at 3:37 PM No comments: