No malls, no crazy shoppers or traffic. Just me, a bucket a bait, and a leftover turkey and dressing sandwich. Put in a the mouth of the Salmon River at about 7:30 for a day or relaxing fishing while my wife went shopping. Stopped into Fishin' Factory III for some jumbo shiners. Go big or go home. Started at the mouth of the outflow, but the tide was changing and there was another boat where I wanted fish. Ran out a few lines and worked the adjacent area with a few swim baits. Kid in the boat near me managed to hook and land a 32" pike, but nothing for me. Ran into Salmon Cove, and then down to Chapman's. Chapman's was loaded with some fat yellow perch, pickerel and a number of pike. Hooked some smaller pike, but for the most part, they just shredded my jumbo shiners without getting the hook. Lost a fish that made the entire balloon disappear underwater. That's the type of fish I want. Caught enough that I decided to head back towards Salmon, then decided to take another shot at the outflow. Tide was moving out, and the day was getting longer. The last few boats where heading out as I landed a fat 9lb., 31-32" pike, followed by a 26" fish. Not a bad way to spend Black Friday!
Posted by RNA at 6:59 PM No comments:

Freezer Filler on the Blackhawk 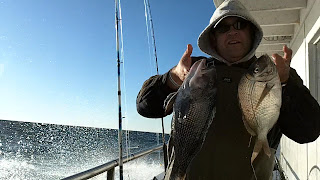 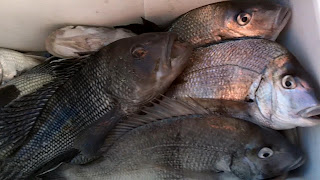 Great November day to head out and replace some of the fish I had to throw out last week. Went out on the Blackhawk in search of anything we could find on the bottom. Left from Noank at 8:00am and headed to the north side of Block for a quick look. The area had slowed down from last week so after 2 drifts we continued to head south around Block Island. On the south side we immediately started catching - dogfish. The only dogfish I want to land is a Dogfish Head 90 minute IPA or one of their other fine brews (www.dogfish.com - check them out!). We continued south to deeper waters, gradually working all the way down near Coxes Ledge. The fishing for dinner plate size scup, nice sea bass and the occasional keeper cod was steady, and we ended up staying on the fishing grounds for an additional 2 hours. If this was my last salt water trip of the year, it was a good way to finish up. Thanks to Capt. Greg, Steve and the crew of the Blackhawk.
Posted by RNA at 6:59 PM No comments: