About the time the late summer doldrums really start hitting home, the “funny fish” begin to arrive to living things back up and usher in the fall season, first with the bonito followed by the false albacore. Not only are bonito and false albacore some of the more exotic looking fish to visit our shores, they’re also some of the most fun to catch, offering frantic adrenaline rushes as you snap cast to a breaking school knowing you have perhaps just a few seconds to hook up to what can be a blistering run. The bonito make some of the best table fare, either as sashimi or perhaps seared steaks, as opposed to the albies, who provide more excitement on the line, but much less so at the dinner table (sharks and other large pelagics aside). 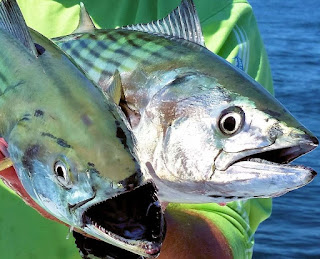 While typically targeted in eastern CT, RI and NY waters around Fishers Island, last seasons saw albies thick in as far west as Milford. Other seasons, they seem to almost completely bypass us. These fish are all chasing the schools of squid, silversides, bay anchovies, peanut bunker and other small baits present in large numbers in late August and September. Surfcasters need to combine knowledge and luck to land these fish, as they can travel at speeds up to 40 miles per hour. Obviously points and jetties provide prime locations, but you can also score from the open beach, particularly when conditions are pushing the small bait in close. From a boat or a yak, things get a bit easier to either set up off points where the fish are likely to pass, or to slow cruise along open stretches of beach with the tide and bait, watching for telltale signs on the surface or working birds. These fish often are mixed in or around smaller blues, but their distinctive green back will give them away on the surface. Don’t be afraid to blind cast though, and don’t just key on birds, as these things move so fast. My biggest rule, however, and one that I believe yields me higher hookup ratios than a lot of other boats, is to stay away from other boats! There simply isn’t much point in hanging around a group of other idling boats, waiting for the fish to show back up, or running and gunning to get to a breaking school in the distance.  Places like Watch Hill, RI get absolutely ridiculous during the albie runs. Fish away from the pack. 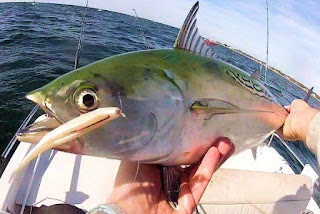 As to gear, you’d better be rigged and ready. I like fishing both fly (saving for another post) and 7-1/2 foot medium fast spinning rods with 30lb. superbraid and 15-20lb. fluorocarbon leaders. The bonito will often take larger baits, and my favorites are 5-/12” Yo-Zuri Crystal Minnows or similar stick baits in flashy colors, mackerel patterns, soft plastics like local Plum Island (http://plumislandbaits.com) and Cobra Baits (http://www.cobrabait.com/) on bullet jigs, Deadly Dicks, etc. For the albies, you will likely need to downsize as they are ripping through clouds of bay anchovies, silversides, peanut bunker and other small profile baits, typically at the top of the water column. I love unweighted Albie Snax (http://longcastplastics.com), Zoom flukes and will be trying Cobra Baits new Bay Anchovy soft plastic. Of course, make sure to include smaller Deadly Dicks, Shimano Waxwings, Hogy Epoxy Jigs and similar type hard lures. My other favorite is spin casting flies or epoxy teasers tied to a a 2” Deadly Dick type body with 2’ of 15lb. fluoro (See below). Albies can be finicky, so don’t hesitate to switch it up. I generally keep a rod ready rigged with each of the above, as there is no time to be messing around with tying on new lures. 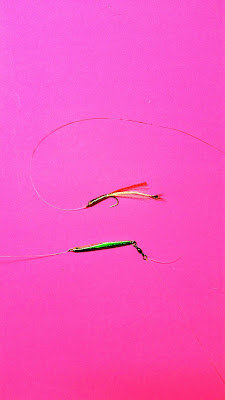 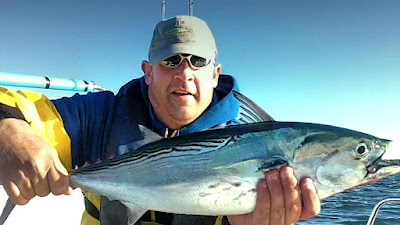 If you haven’t been out on the bonito yet, you’d better get going. Meanwhile, let’s cross our fingers and say a prayer to the fish gods that this year produces another strong albie run as well!

P.S. - This was a real short primer. If you have questions or want to know more, shoot me a message. 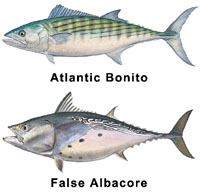 Here’s a good video to check out.
https://www.youtube.com/watch?v=5v9rzJwlJL8 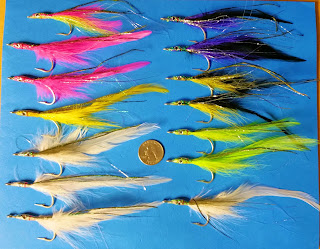