Crazy Albie Days and Avoiding the Run and Gun Club.


The fall run is now well underway in waters, from bluefin off to the inshore craziness as fish tear into the abundant bait in preparation for the runs south or winter holdovers. Leading off this fantastic fall fishery are the albies and bonito that arrive along the southern coasts chasing bay anchovies, silverside, squid and more. Guys up here wait all season for what is typically a pretty short albie run, hoping to catch these little speedsters on light tackle or the fly. As soon as the first few reports trickle in, the craziness erupts. If you're really lucky and can get out after them during the beginning of the run on a weekday, chances are good of racking up double digit tallies on fish that are looking to hit just about anything. Such was my buddy's luck on a two dozen plus day in a kayak. Unfortunately for me, the run usually coincides with my return to the classroom, relegating me to the role of weekend warrior with most of the rest of the world. By the end of the first weekend or two, those fish have been run over by about a thousand boats and seen every type of lure and fly presentation. They can get pretty damned picky. 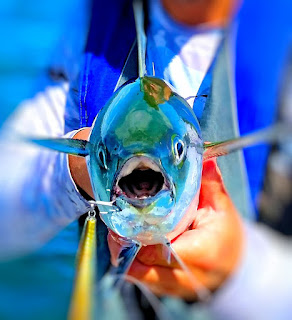 The most popular spots are busier than ever as soon as the first pictures start appearing online, something of which we're all guilty. Places like (OK - Spotburn Alert!) Watch Hill, RI might see three to four dozen boats of all sizes intermingled with kayakers all vying for those green speedsters, and anyone who's fished them is familiar with the Run and Gun Club.  Fish pop up, and boats come gunning from all directions. Fish go down. Fish pop up a quarter mile away. Repeat the process. Few fish are actually hooked. Tempers flare. Even if you don't want to play, you get sucked in. I arrived at Watch Hill past Saturday with boats stretched from the point to the outer reef. I just wanted to get through and push further east, away from other boats. Dropping down to idle speed I find some open water to pass through. Another boat comes across my bow and I disengage my motor and let him pass. I bump back into gear and as I do so, the albies briefly pop up in front of me and then disappear. I've now got the guy who just cut across cussing me out for putting down the fish. Part of me wanted to tell him to go f&*k himself, while the other part knew he was pretty much an idiot wasting his time and not worth the effort.

As I mentioned in a previous article, my biggest rule for fishing these fish is to STAY AWAY from other boats.  If a school starts blitzing 300 yards away and boats are heading in that direction, don't waste your time. Find some open water on the edges, kill your engine and wait. Chances are pretty good the fish will resurface nearby because the bait and the chasing albies will be moving to a  place away from all of the surface commotion. Look for the one or two birds circling way away from the gaggle of boats. If you figure it out, you'll never have to chase the albies. If you've got lots of fish and boats but the fish just aren't biting, break away from the pack. In doing so this past weekend, we were able to fish some blitzes completely on our own with fish much more willing to hit our presentations.

So here are my best tips for "chasing" albies:
·        Don't chase, observe the patterns and let them come to you.
·        Maneuver slowly. Avoid the temptation to gun it forward. Chances are you're just going to put the fish down.
·        Kill you motor as you near the blitz, and don't sit around with your motor idling either.
·        Stay away from other boats by hanging on the outskirts or striking out on your own.

As always, Tight Lines,
The RedneckAngler 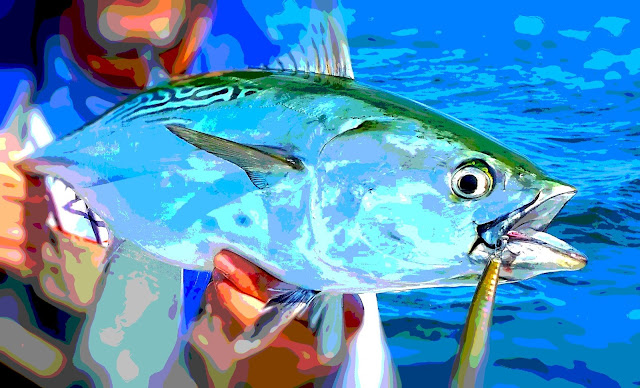 Albies (or not) and Tropical Storm Hermine

SO I got a few goods report that the albies were in off the West Wall. Naturally, with Tropical Storm Hermine bearing down, I had to go see for myself. I put the word out that I wanted to go fish in a storm, and my buddy Jim decided to join me on his first surf fishing excursion. I told him that the whole idea was a crap shoot, with 10-13' seas forecast for the Block Island Sound. 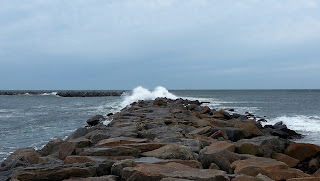 We arrived around 8:30 a.m, a few hours before the predicted high tide, and while the surf itself was as predicted, the water beyond was fairly smooth. Winds were maybe pushing 20-25kt. We fished for about 45 minutes with no luck and no visual signs of fish. The day's excitement came as three individuals decided to head in, having to cross the low section that was beginning to wash over. As they tried to run across the wet rocks to avoid waves and to stay dry (incredibly stupid), they were caught unprepared by the first of a large set sweeping the jetty. All three disappeared, with one surfacing 20' off the rocks in the water. As they scrambled and swam back to the rocks, attempting to retrieve gear, they were swept by a second wave and all ended up off the jetty. From our location, all we could do was watch and hope they could swim. They managed to get back to the rocks and across the section, minus all of their rods, coolers, buckets, jackets and more that was drifting out to sea. Jim and I decided that waiting too much longer, risking getting caught with another 1-1/2 hour of incoming, wasn't worth it, so we also headed in. Crossing the section with Korkers and a little common sense was much easier.

We checked out some surfing, the Charlestown breachway, and had lunch at Jim's Dock https://www.facebook.com/Jims-Dock-125058440878262/?fref=ts, before giving it another shot on the outgoing tide. While the surf dropped, the wind picked up to 45-50mph gusts. A few albies were breaking past the fish traps, but the point was still getting buried by large waves. We threw in the towel.
Good fishing or not, I love just experiencing the raw power of the ocean in a big storm. Whether or not this blows in those albies, or sends them shooting right past us, has yet to be seen. Here's hoping for the latter!
First shot - break in the jetties were the three guys would later be swept off.
#2 Surfing off Green Hill
#3 Charlestown beachway