One of the Best Nights of Striper Fishing, and I Don't Want to Do It Again.

After two months of seeing pics of huge stripers from , I finally had a night where conditions were good and I had to time to run over in my little Gemma Rose 2 and get in on the action. My friend Mike and I ran across the Block Island Sound with a few guys that regularly fish Block in their own small boat. We left around , and after a quick peek at Watch Hill, I turned the bow to Block and we set out. The run took us about an hour. It wasn't too difficult to figure out when we'd arrived, as there were already four dozen plus boats with more heading our way. The plan was to fish the flood until it gave way around , and then head back under the full moon before the outgoing tide picked up. We were loaded up with eels and Gravity Tackle 13.5" Soft Eels. 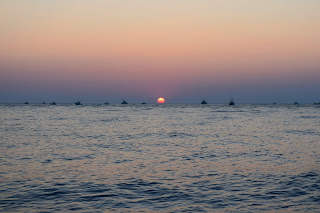 Rigged up, we ran to the top of the line of drifting boats and dropped our eels on 3-way rigs. It wasn't too long before I felt a huge thump and set the hook hard. My rod doubled, and I pushed my Seigler SG drag all the way forward. There was no finesse here, it was brute force on force, and eventually a 40+lb. fish emerged on the surface. I was thrilled until I saw the fish had been gut hooked. Knowing we'd be targeting huge fish, I'd switched from a circle to an Owner 8/0 baitfish hook. We cut the line and spent ten minutes trying to revive the fish boat side. My small craft and low gunnels enabled us to get right down on the water as we worked to revive it. A big proponent of catch and release, especially with large breeding fish, this was not the start I was after, but it sometimes happens.

As the last light faded, I was astonished by the number of boats that had joined the line-up. It looked like Interstate 95 at night, one lane drifting north and another running back south to start again. Everyone was hooking into these big fish.  Having lost the first fish, I went back to circles, willing to risk losing a larger fish to a missed hook set. Mike and I doubled on the second drift, and most there after. These fish were enormous, and after each fight, took time to properly revive. After the two fish photographed, which weren't the largest of the night, we stopped even taking them out of the water. We never weighed or measured a single fish. Despite this, we lost one more fish before we departed. This one was hooked top side of the lip, boated quickly, never left the water, and we spent 10+ minutes trying to revive her. 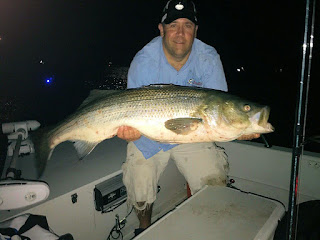 Hooking into these big fish was a thrill, and you would be hard pressed to find a more consistent bite of monster stripers than what we have experienced here the last season or two. That said, I looked at the numbers of boats sitting on these fish, thinking about how many will end up floaters a few miles out to sea. These big fish fight themselves into complete exhaustion, even when fished with heavy gear. How can you revive them when you're in a big sport fisher? They may kick the tail a few times and then head down, but that doesn't equate to survivability. I saw countless fish tossed back in off big boats after pictures, measurements, more pictures. The Gemma Rose 2 allowed us to be right down on the water reviving these fish, and we still lost two despite all of our efforts.

As we motored back on a calm clear night, I had the time to reflect on the evening. I thoroughly enjoyed the opportunity to land some huge stripers, yet the mystique of  50lb. fish had disappeared. It was like going hunting in a zoo. The surf guys love the expression, "Boat fish don't count." Do Block fish I wondered? Maybe 60 is the new 50? (Especially as I near 50.) One great night of monster fish is "Epic," but night after night? What is the long term impact of these big breeders getting hammered night after night, where mortality rates, despite catch and release, have to be higher than a lot of folks realize or will admit? I'm really just trying to share my own thoughts on the night I experienced Friday, and I personal decision that is right for me. I love chasing stripers, and the hope of landing a true fish of a lifetime the next time out is always there. It was one of the best nights of striper fishing I have ever experienced, and that said, I have no desire to go back and do it again.

The number of sole options for Korkers boots seems to have exploded. I recently bought a pair of the Korkers TRIPLE THREAT ALUMINUM HEX SOLES when I stopped in Mossy Creek Fly Fishing on my last trip down to VA. The hex cleats seemed like a much better option than the aluminum bars, which don't really allow for much flexibility in the soles of your boots. I've avoided wearing the studded felt soles (banned in an increasing number of places) in an effort to prevent the cross contamination that is ruining many of our streams, and have generally used the less aggressive studded cling-on soles. I also wondered how the Hex Soles would fare in a saltwater environment, rock hopping on jetties. Would they be as effective as my Korkers RockTrax? Busting ass on a jetty at night is not fun! After a several trips out in a variety of terrain environments, I have to say my overall impression is pretty positive. They excel in all of the river bottoms I waded, from smooth and slick, snot covered rocks to sharper, jagged bottoms. They grip everything and I could wade with confidence. That should easily translate to the salt, right? Here, I still have to go with the RockTrax for two key reasons. As the tide drops, you get rocks exposed that are covered in much heavier layers of seaweed and other stuff, and the spikes just cut down through this better. I also noticed that they wear pretty quickly, especially on rough, dry jetty rock, so I'll probably be ordering another $30 package of hex discs pretty soon, and using these mostly in rivers. However, if you're a predominantly freshwater guy that does an occasional surfcasting trip, these will more than meet your needs.