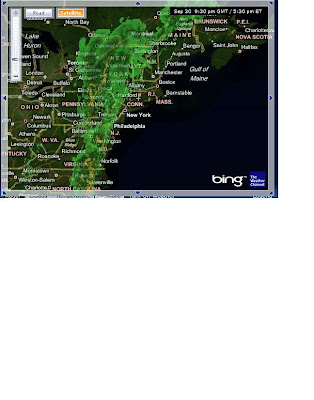 September 30, 2010 - Out early today so I thought I'd fish. Huge front is moving up the coast and it is windy as hell, so I figured I'd fish a nice sheltered local area. Wish I were striper fishing the front side of the system, but oh well. A quick stop to a local hole is all I'll get. Goal was to fish for the cycle (4 species) on one lure on the Quinnipiac. Check out the nice rainbow.

This year's BFB was another success. Special thanks to Meatloaf for all his work. Thanks to the captain and crew of the Sunbeam V for putting us on the fish and bringing us ALL back!

Nice but choppy day out today. The water temp is down to about 67 throughout most of the Niantic shore areas. Was hoping to see the albies today, but they weren't this far west on the shores yet. Some reports to Hillyers of a few schools in Plum Gut. Caught some stripers early on tube and worm. Only 1 keeper at 28". However, I did see a kayaker catch a 40"+ on Goshen beach, so the bigger fish are starting to more back closer to shore to feed. Mixed bag today with stripers, porgies, blues and a whopping 7" black seas bass. He struck a tin almost as big as he/she was.

Take a Vet Fishing Report from 9/11

Just a quick report. No vids. Fishe Stonington/Fisher's Island Sound Monday, Labor Day from 5:30am-noon. Lots of snapper blues, some reports of a few stripers, mostly schooolies. I did not see any bones or albies anywhere inside Watch Hill/Fishers Island, and I didn't get first hand claims of catching any on Watch Hill or Sugar reefs. May go again Thursday.
Posted by RNA at 3:47 PM No comments:

Well, Earl didn't really pan out up here. I was hoping for a good blow to turn things over in the LIS, but it looks like all that Earl did was scare away tourists from the Cape beaches. Heading to Watch Hill in the morning, hoping the albies will show. Be reporting tomorrow evening.
Posted by RNA at 7:57 PM No comments: