Yes, yes, everybody knows - fishing. Yes, I drove more miles to catch no fish than I ever have before in my life, over 1,000 miles in fact. But you know what? I'd do it over again. The plan was to head to upstate to fish the lower for big browns, steelhead and lake trout. This is the time of year when the crowds begin to thin, the temperatures drop, and the fishing really heats up. My brother had hooked me up with accommodations thanks to his supply of hotel points, but wouldn't be joining me as he was stuck somewhere in the remote south west of New Zealand in Fox Glacier, but that's another story all together. The plan was for my son Danny and I to drive up to Niagara Falls, NY Friday evening, fish Saturday with Capt. Mark “Sparky”McGranahan, make our own way along the river around Art Park on Sunday, and maybe hit up a few of the tribs on the way back Monday. We were prepped for an epic father/son weekend of non-stop fishing! 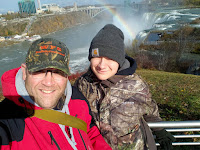 Capt. Sparky called Thursday before our departure with news that the was in bad shape, and it would be pointless fishing Saturday. He didn't want us to make the long drive, only to be disappointed by a boat ride. I respect that in a captain or guide. I told him we had the free accommodation and would make the trip regardless, with flexibility through Monday should conditions improve, and he promised to keep us updated. The trip up took nine hours, as we ran into the first snow storm of the winter. It was early Saturday morning by the time we hit the bed. 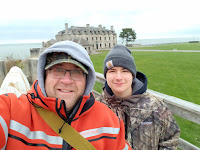 We woke to clearing skies and 45+ mph winds. Fishing the Niagara was completely out of the question, and neither Danny nor myself felt like driving over an hour back the way we came to hit some smaller, more protected locations. Instead, we went sight seeing at the falls and up to . It was pretty cool visiting the fort on a cold, wind swept day, pounding up against the break walls and the place all but deserted. A British regular of the 8th Kings Foot Regiment and a ten year veteran at (with the US Park Service) gave all 5-6 of us a tour and weapons demonstration. He apparently works this job year round, and I could only imagine him standing out in the freezing rain and snow during the winter months, dressed in a full 18th century period uniform, struggling to fire a flint lock musket for the 1-2 visitors that might arrive. From there, it's not that great a leap to what a real twenty year posting must have been like in the 1760s, or for the French before them. As a history teacher, I loved it, and Danny said it was the best thing he's done in . On the way to the Brickyard Pub & BBQ  (Lewistown - great place, recommended), Sparky called to let us know Sunday was going to be a no go as well. 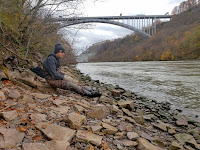 I was bound and determined to at least say we'd fished the , come hell or brown, chocolaty water! Sunday morning, we fished Art Park along the banks of the mighty . We knew it was loaded with fish, because despite the 4-6" maximum visibility, they would surface quite regularly. We fished float rigs, cast all the flies in my arsenal, egg sacks and a variety of junk flies with absolutely no success. For the entire morning through mid-afternoon I only saw two fish on, and none landed. It was a valiant but ultimately futile effort. Danny hung in like a trooper. He doesn't whine or complain when the fish don't cooperate. He's landed more than a few nice fish by just gritting it out on really slow days. I finally yielded and we called it a day with no fish what-so-ever. Sparky texted that he was canceling all trips through at least Tuesday. To try and purge the whiff of the skunking, we drove down to and the Anchor Bar on , home of the original buffalo wing. Wings and beer (Diet Coke for Danny) cure a lot. I'd also add that is experiencing an urban renaissance and is a pretty incredible city for architecture. 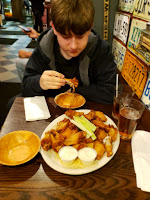 Monday started with an early departure from , with a quick stop by Johnson's Creek and Oak Orchard. The Oak was pretty busy, though the first light, great bite had died down. All of the most productive waters were elbow to elbow, and as late arrivals, we had to take what we could get. I managed to hook into a nice, big brown before too long, which I handed off to Danny. Danny's brought in some nice steelhead on the fly, was fighting this fish well for quite a bit and appeared to be getting the upper hand until it made a quick final run and broke off. We fished for another 30-40 minutes without any further bites. Now, I'm stubborn enough to fish to the last dying light, sleep in the truck and start again in the morning, but facing 6-1/2 hours more of driving and a kid that needed to be in school the next day, I was forced to accept the ultimate defeat.

The fishing sucked, the catching was non-existant, the driving was long and tiring, and thoughts of returning to work the next day were depressing. Danny and I have been on tons of trips far more successful than this. Still, I got to get away with my boy, and that makes up for everything else!