Thanks to all those I know who let their voices be heard through Keep America Fishing and helped push this important series of regulations through!  No bunker = no sportfishing in the NE!  Hopefully, this will allow stocks to replenish, and we will see the effect across the board.
Posted by RNA at 7:36 PM No comments:

Connecticut and Rhode Island Fishing Report 12-27-12
Posted by RNA at 7:32 PM No comments:

Take a look at the video collection I put together for the soon to launch RNA website. I look back at several clips from previous reports and outings with friends and some of the top captains and guides on the east coast. TONS of new stuff will be coming out in 2013, as I will be putting to the test and reviewing some new gear (even before it hits the shelves). I'll again be fishing throughout the north east and reporting to you.
Posted by RNA at 10:26 PM No comments:

The Best Sport Fishing Boats of All Time | Salt Water Sportsman
Fun posting, with one big omission! What about the original sportfishing boats? In 1937 Capt. Ernal Foster built the Albatross, and with it launched sportfishing in the OBX. You can still fish aboard the Albatrosses I, II, and III today. 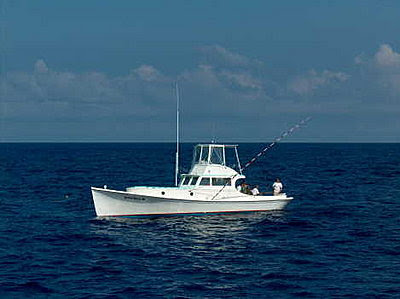 THE ALBATROSS FLEET
Posted by RNA at 4:21 PM No comments:

Orvis Clearwater 8-weight 10' Fly Rod- Fishing (Google Affiliate Ad)Well, I went up to Altmar to fish steelies on the Salmon River with my brother Doug and friend and guide Scott Glazier. I love the December fishing, as the crowds subside and there are nice steelhead in the upper river. It’s not a fast and furious bite like the spring run, and fish are transitioning into winter patterns, but the chances for both large fish as well as incoming fresh fish abound. Water was finally up as the power company increased the flow from below 250-300cfs to about 750+cfs Friday evening. Two weeks ago we were bumping ass down the river, now we had some water. Of course, these fish are sensitive to change, which can challenge anglers not out fishing the river almost daily. Scott is excellent, and put us on a number of good fish Saturday. If you are only used to the salmon runs, or the spring steelhead runs, this may not be the type of fishing you are accustomed to. Rarely are you going to hook dozens of fish, so you have to make hookups count. I went O’fer seven (0-7), in an embarrassing display of how to lose fish. Now, Scott describes my brother’s fishing skills as “unique,” which is a polite way to say he doesn’t fish regularly and often does most everything wrong. However, last Saturday he landed his first two fish, including one really nice steelie, while I dumped fish after fish.

Doug with a nice steelhead. 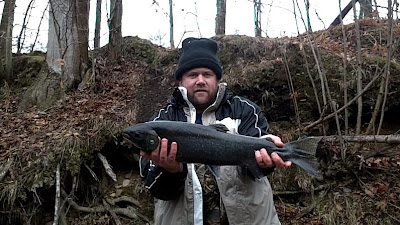 What I love about steelhead fishing are the battles, and the fact that the odds are often stacked against you. Many anglers would consider the light line class, small hooks and flies almost absurd for tackling aggressive fish that can run up into the double digits. I don't care how good you are, you will lose a lot of fish even when you do everything "right." Compound these factors with mistakes, and say bye-bye to your trophy steelhead. If I could find a way to screw up Saturday, I did. Lost the first when after struggling to turn it back upstream, it shot straight towards and past me before I could recover enough line. Hit the end of the slack and GONE. Lost number two, a nice fresh looking chromer, in a submerged limb.

Picture from an earlier trip with a nice, fresh, right off the Lake chrome steelhead, or chromer. 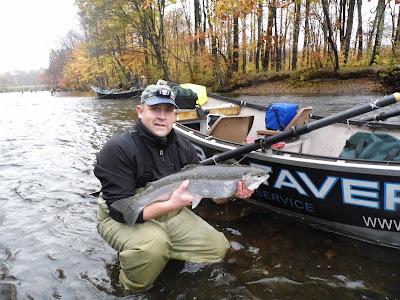 Number three went the same way. Number four I was screwing around with the tangle I had in my working line loop when Mr. Fish hit. I was completely unprepared, unable to get tight on the fish, and goodbye number four. Bye this time, I was getting pretty annoyed with myself. Snagged the bottom again with my fly or weight (this happens fairly often). Between the rocks, trees and lost gear, there is a lot to get hung upon. Unable to work it lose, I resort to thumbing the reel and backing up to pop the line instead of my rod tip. Line pops free. As I start to reel in, WHAM. Fish on, fish off. Bent hook, likely from freeing the snag. Let's see, that was number five. A few leaps expose six to be a real nice, big, fresh chromer right off the Lake. It leaps, turns and heads down stream. After a patient battle, I'm able to slowly start working her back towards me. This is slow going, not wanting to rush the process. I finally get the fish out of the current and only feet away. I'm backing slowly towards a pocket of slow water to land her in. Glancing over my shoulder, I realize my brother is standing there filming with no idea my fish is headed straight for his legs. I yell at him to watch out, he proceeds to lurch out of the way, the fish freaks out and leaps in the air and now is downstream facing me, and the hook pulls. My brothers response? "The line never touched me. How many fish is that?" Number seven? Who the hell knows. Did everything right and the fish got off. O'fer seven. I have yet to see my brother's video. Should have him walking over my fish. I'll post it when he does. Had time to fish Sunday morning before driving back to CT. Didn't break my neck to get out, as crowds were sparse and the fishing hadn't been picking up until and hour or so after dawn. I wanted to redeem myself after Saturday's outing. I made a vow to Scott that I wasn't leaving until I had a fish. I think everyone on the river was in the Schoolhouse, so I started a bit lower. After an hour with no bites, I moved even further to the pocket I had hooked most of the fish in Saturday. I began to notice that the flow was decreasing, and two more hours later, still not a single hit. Made one last stop at a location I have never not gotten a hit in, and still drew a blank. By now, you could see a six to eight inch water line on the rocks. It was looking like a tidal river. The flow at the dam had been cut way back. Decided to call it a day, and was faced with a drive back to CT without having landed a single fish. Looks like I'm going to have to head back up during the holidays!
Posted by RNA at 4:45 PM No comments: 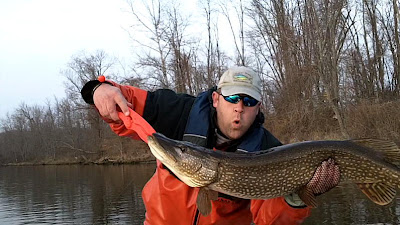 Whoooooooooooo!!! A December pike that mauled a 10" live bait.

Yes, I realize that the weather is starting to bite, and most guys and gals have put away their open water gear, winterized boats, and are awaiting the first fishable ice. I have to tell you, if the ice isn't here, you're may be missing some great fishing. Holdover stripers have been moving into the Housie and Thames Rivers, both small enough and accessible from shore or boat to make locating and catching ridiculous numbers of schoolies, with an occasional keeper, a distinct possibility. I'm talking about 20, 30, 40 fish in an afternoon if you find those schools and park on top of them. 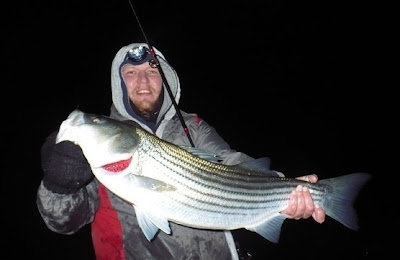 Local ponds and lakes hold bass that are still looking to forage as they transition into the long New England winter. Crappie and yellow perch fishing is about as good as you can get, I'm talking true pan sized fish. Of course, my local favorites since making the move north to CT, are the northern pike which are moving into the coves off the CT River, devouring anything in their paths. This time of year, these apex predators can be approaching four feet long with some serious girth to boot. You never know, on any given December day, you might even catch all of these while fishing the CT River. Instead of bemoaning the lack of ice, bundle up, grab a rod, and take advantage of the great local action this month. 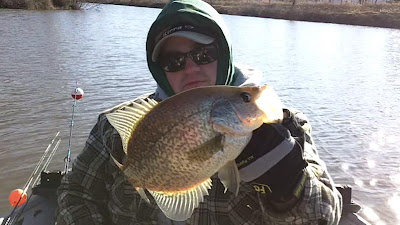 A bit of cooking spray can help the rod tips. 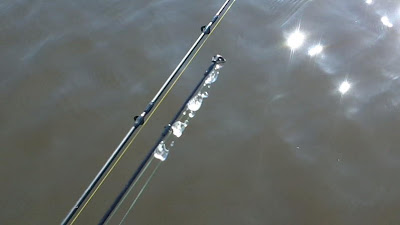