The Kayak Corner: Nighttime Kayak Fishing
Posted by RNA at 4:56 PM No comments:

How to Fish Rips and Shoals

How to Fish Rips and Shoals
Posted by RNA at 4:51 PM No comments:

Rhode Island and Connecticut Fishing Report 8-22-13
Posted by RNA at 11:29 AM No comments:

Just returned from a week down in Virginia with my wife and kids, visiting friends and family and sneaking in some fishing as well. I've been waiting for a chance to fish some of the James River blue catfish for quite a while. This fishery has gained a national reputation for producing some of the largest cats in the country. I called up Capt. Jim Garrett at Tripout Catfishing to see if he could take me out for a day. This was a last minute decision, and as tends to happen with me, we had a front moving in with a mass of cold air behind it.

We initially planned a Tuesday afternoon through the night trip, but the forecast forced us to push back to Wednesday morning. I was too excited about the chance at some trophy cats to get much sleep, and by 10:30pm, Fredericksburg had yet to see much of the rain and severe storms predicted. Much of the weather was pushing well north, and my sister in Philly reported 12" of rain and severe flooding. When I rolled out at 2:00am, the air was still warm and the wind was barely noticeable.

I met up with Capt. Jim in Hopewell a bit before 4:00am, and soon we were on the river. The winds were beginning to build to 10-15 knots as we ran down river. Now, if you're looking for fishing with all the bells, whistles and creature comforts of a salon, frou-frou luncheon etc., better charter elsewhere. If you want to catch some monster cats and don't mind a bit of slime, fish with Jim. By 4:30, we were bait in the water, and not long after that, reeling in the first cats.

We had a nice incoming tide, and were fishing a ledge at the mouth of a creek with fresh cut baits on big 8/0 hooks. The catching started of with a 12 pounder and kept getting better from there. We were regular hooking fish in the 15-20lb. range, and soon after sunrise I hooked my first citation fish of the day, a fat 33lber. I was amazed at the tail slaps I could see all around us and out in the main channel. It was like being surrounded by 30-50lb. stripers crashing the surface. Some of these fish had to be well north of 50lbs. These things are the apex predator on the river, and will chase shad or anything else around. Not too long after the first big fish, citation number two at just over 30lbs. was brought on board. It between, I'm pitching numerous 20 pound fish back into the water. (I did take two smaller fish for some fried catfish!)

By about 11:00am, the tide was changing and the wind was blowing 22 knots. The fishing had slowed, and I was guessing we were nearing the end of the day. The front rod doubled over and line began to peel. I knew I had a decent fish on, but he came up pretty quickly...until he saw the boat. Back to the bottom a few times before we brought my biggest fish of the day, a beautiful 43lb. Virginia blue catfish, on board. This is what I had come down for!

Jim asked the one question I love to hear from captain, "You got anywhere you need to be?" Hell no. We continued to mark some big catfish, and I was more than happy to fish a while longer. We set up for another hour, landing one more good fish, before taking the ride back up river. It really was a pretty ride, past plantations and some beautiful countryside that I hadn't been able to see during the ride down. One shocker was the fact that we never saw another boat the entire trip!

I can't wait to fish for these beasts again, and will certainly be giving Jim a call whenever I head back to VA. That 100+lb. fish is out there somewhere. Maybe we'll have a catfish fry for Christmas! 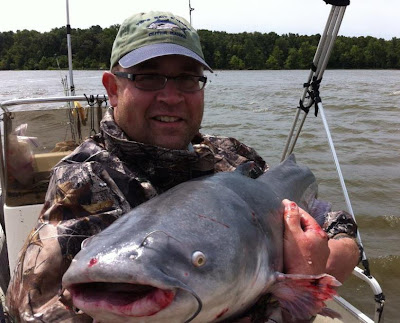 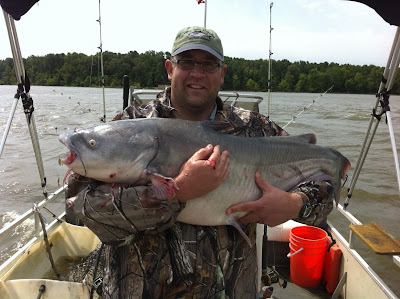 Fishin' Frogs in Your Local Pond

Fishin' frogs on your local pond in the summertime can be a real blast.  The technique is easy, and often one of the few that work to cover a large amount of the slimy, scummy water that you are likely encounter.  In fact, my local pond gets so scummed over that many people give up this time of year.  I love it!  Nothing beats a bass exploding through pads or scum mats and inhaling a frog.

Many of our local ponds, such as mine, are pretty shallow with little variation in bottom structure.  I'm often targeting bass in 2-3 feet of water in the middle of the pond and the day, as they will hold under the pads and scum rather than the marginally deeper water with less overhead.  Don't be afraid to go shallow!  Skip those frogs under the overhangs, right up to the banks as well.


There are a ton of different frog lures on the market, from soft bodies like the Zoom Horny Toads, Stanley Ribbits and Bass Pro Humpin' Toads, to hollow bodies like the Livetargets, Spro Bronze Eyes, and the ones I've been fishing a lot, the Booyah Pad Crasher's and Poppin Pad Crasher's.   The techniques are petty easy.  The soft plastics can be fished fast across the top for reaction strikes, or slow enough that they will swim and pause sub surface or even "swim" down to the bottom and back up mimicking real frogs.  Vary your retrieves to see what works.  The hollow bodies are top water and excel at slipping across the heaviest muck you pond can throw at you.  I really like the popping action of the new Booyah.  The one line that I was not at all pleased with was Scum Frog.  Their legs didn't hold up to strikes. 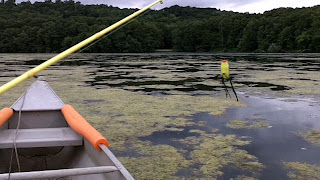 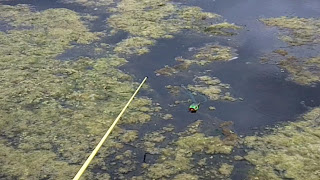 Hooking the fish in heavy cover is half the battle.  A thick matt of scum can make a 3lb. bass feel like 10lbs. of dead weight.  Spool up on heavy braid, and when you get the fish boat side, be ready with a net.  You'll have to get under the fish and all of the scum.  The good thing is that the fish usually can't see the net coming.  Lift to hard, and you'll pull the hook or snap your rod tip. 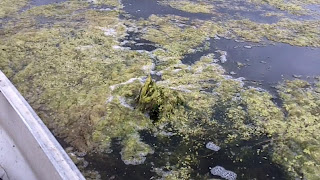 There's a fish down there somewhere. 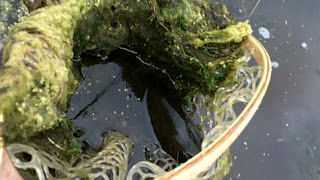 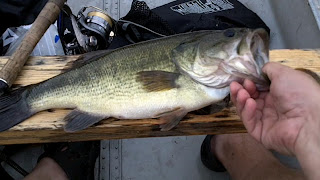 If you hit your local pond in August without an arsenal of frogs, you are just plain crazy!

Report: White Marlin Caught in Cape Cod Canal
Posted by RNA at 11:44 AM No comments:

Took my first shot at carping today, and I've got a lot to learn.  You have to be part fisherman and part Betty Crocker, and spend a lot of time sitting on your **s.  I'm not too good at either of the latter two, but the payoff seems to be pretty good once you get the hang of it.  Watching these things leap all around me during my early a.m. bass outings, and that fact that one of the charter captains I've fished with is obsessed with these "Golden Bonefish", got me more than a little curious.


So, I did what everyone does to learn something new, I went to Google and YouTube and watched some videos.  A guy on one of my fishing forums also provided a ton of good advice for getting started, which I followed, kind of.  It seems as if a lot of the carp fishing is in the prepping, from the method balls and boilies to hair rigs.  Last night I didn't really put all six Ps (Proper Planning Prevents Piss-Poor Performance) into effect.  I ran out of oats, didn't go get more,  and thus had some sticky method balls.  I figured they'd do in a pinch.  I didn't feel like doing up hair rigs and figured I'd just bait on the top of the hook. 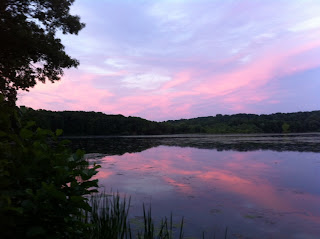 I got up early, hit my spot and started baiting.  The carp clearly weren't around in the numbers from the last few days, but given what I had, I was all in at my location.  I've always despised sitting on an anchor and chumming, which is essentially carp fishing, but I'm not going to pull 20 pound bass out of the pond 5 minutes from my front door.   I even left my bass gear at home so I wouldn't be tempted to throw in the towel.  Two hours later I'd had enough.  Getting skunked is a rarity, and I can't stand it.  Next weekend I'm going to head across the pond to where a couple of old timers are always set up carping, leave my gear in the truck, and see if I can pick up some good advice.  As I said, I've got a lot to learn.
Posted by RNA at 7:25 PM 2 comments: