Bait, bait everywhere, and nary a striper to see. (5/19/13 on the Lower Connecticut River)

Bait, bait everywhere, and nary a striper to see.  I decided to move down river this weekend, despite the stripers still hanging north of Middletown.  This was my first trip to the mouth of the CT River, as I had heard that action was pretty decent around the last week or so.  After yesterday afternoon's trip cut short (20 min. total) by a problem with the Lowrance, I was back on the water at this morning.  The tide was coming in until about , and it was dead calm.  I'll never get tired of a sunrise over the water. 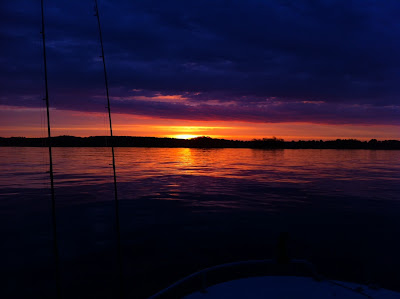 I started throwing pearl Sluggos and some swim baits, and had a few swirls and swipes, but no hooksets.  Close to and hour and a half of work did not produce a fish, nor did I see any pulled in by anyone else in the area. I decided to motor north and see what I could find.  A few swirls above the 95 bridge, but I just couldn't get a fish to bite.
Just below Hamburg Cove, the water exploded with herring.  I was marking a school so thick It looked like the bottom was at 10 feet in 30+ feet of water.  Surely, bass had to be beneath.  I dropped  soft plastics through the school, bouncing them of fish as they descended.  I fished swimbaits at every level and sluggos on top.  Nada.  Nothing.  I wasn't marking any big fish either.  Same story with two or three other boats that had been working the school for a while.  Livelining may have been the trick, but also illegal with river run herring.

Time running short, I ran back to the mouth where the earlier action repeated itself.  Swirls, but no takers.  I'm sure I could have ground out a fish or two, but I had to be in early.  This was my first, and hopefully last, skunk of the season.

51.66 Pound Rhode Island Surf Striper Weighed In
Posted by RNA at 11:29 AM No comments:

First good, long trip of the season.  The CT River is full of herring and stripers!  Put in Friday evening at Rocky Hill around dusk.  was about full.  Just north I hit the flotilla of boats catching stripers either anchored doing the soak and sit or casting.  I hate fishing in big groups, so I decided to run north.  Went as far as the before I began working back down.  There were herring and stripers scattered the whole way. I was tossing a few different soft plastics, pencil poppers, Bomber A-Salts and some other similar type lures.  Picked up a number of schoolies and fish in the low 30's.  When I got tired of casting, I'd switch over to trolling a big jointed surface plug and a sub-surface swimmer in a herring pattern.  Hits on those as well.  I'd occasionally snag herring on the trolling lures, and as tempting as it was to liveline, threw 'em back.
The fishing wasn't the only interesting activity.  Sometime around at the mouth of Wethersfield Cove, I heard several sets of brakes lock for 2-3 seconds before a series of crashes on 91.  By about , I arrived back at the Rocky Hill launch.  There was one guy packing up on the dock, and mine was the only trailer left.  I pulled my boat, stowed some gear, and crawled into the back for a nap before heading back out.  I remember waking when the rain started a bit after three.  It was loud as hell on the truck cap roof.  I dozed off again.  I was awakened less than an hour later by a door shutting, voices, and flashing blue lights.  I couldn't see a damn thing through the fogged windows.  I cleared a small patch and peered out at the three squad cars surrounding a vehicle not fifty feet from me.  Cops were questioning the two occupants.  Not wanting to just pop out behind them, I tried unsuccessfully to go back to sleep.  Thirty minutes later, as as another fisherman was pulling in, I decided it was time to get back out.
Pretty much took the same approach as earlier, with a lot less success.  Caught some fish busting on top around Crow's Point, but otherwise it was pretty slow. A few schoolies.  I talked with several guys who where getting shut out.  When I returned to the launch, there where only a dozen or so trailers, and I probably saw most all of those boats on the river.  I haven't spent near as much time fishing north of , and I've got to say I'm far more comfortable in the lower part of the river.  All this taken into account, it won't be too long before squid start arriving in the Watch Hill area, and I will say goodbye to the river until November.  This is when the real striper fishing begins!
Posted by RNA at 12:25 PM No comments:

That's about all I had to show for my night out on the CT River Saturday and early Sunday. The game plan was straight forward. Fish the outgoing tide from Hartford down to Haddam, catch a few hours of sleep in the truck, and then get back out before dawn to fish Haddam down towards the mouth. I put in around 5:30 pm and worked up with the incoming tide through Middletown. The banks were lined with folks building fires and getting set for a night of soaking worms. I caught a few small schoolies near the powerplant, but wasn't seeing much action, so I continued north. While the banks were dotted most of the way up, not too many boats until north of the Rocky Hill launch. Pretty soon I came across half a dozen anchored up and fishing the bends. I saw a few hook-ups, including one decent keeper, but I just don't like to sit still. I wanted more action, and was willing to poke around more. Just south of the Rt. 3 Glastonbury bridge, things started to improve. Bait was popping all over the surface, and I was marking schools below. A couple of soft plastics on Kalin lead heads yielded a few quick schoolies. Now, I wouldn't normally leave biting fish, but this was also a scouting trip, so I decided to push on up to Hartford. I must admit, I rarely fish up here, and the move was a mistake because I went as far north as the rail bridge without finding another hot spot. I also noted the temperature was rapidly dropping. At this point, let me give a shout out to the folks at weather.com, because once again, you were so far from right. I was expecting a low still in the 40's, and it was already getting down there by ten or so. I was not relishing a night run all the way back down to Haddam, as it is impossible to hunker down behind the windscreen and still see anything other than the reflection of gauges. In the winter I wear a mask and goggles, which were of course at home. At this point, I just wanted off the water. I had to switch fuel tanks around the Pratt dock, meaning I didn't really have enough to fish in the a.m. without refueling. By the time I reached Salmon Cove, I was miserable. I pulled the boat, threw stuff in the truck, and crawled into my weekend fishing season accommodations (the bed with a shell). I'd left my damn sleeping bag in the garage! I chose the air mattress and stadium blanket over the drivers seat and heat. I managed a few hours of shut-eye. I did a walk around before pulling out of the lot, noticing that ice had formed on my decks. My entire body shaking from cold convinced me to turn north on Rt. 9 and a nice warm bed instead of south to the Baldwin Bridge launch. The temperature on the bank at the intersection of Rt. 154 and Rt. 82 in Haddam read 32 degrees as I drove past at 4 a.m.. Could we PLEASE just have some warmer weather? 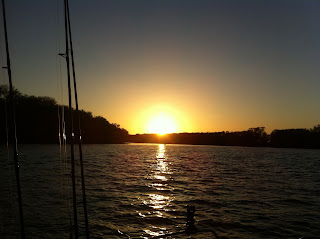 A beautiful sunset south of Wethersfield, CT. This is when I should have called it quits.
Posted by RNA at 8:21 PM No comments: