The wind was supposed to pick up today, so I went out on the Blackhawk this morning. Great action. 2-3 hookups per drift and 30-40 blues (most released) made for a busy day on the water. My arms could barely lift a beer when I got home (but I managed). Steve, Sal and Matt kept the front of the boat humming right along. Can't wait to go fiahing w/ Capt. Greg and the Blackhawk guys again. THANKS!
Posted by RNA at 6:47 PM No comments:

Last week I heard from a reliable source that the scales used to weigh Greg Meyerson's record breaking stripper had not recently been certified. Though numerous rumors were rampant, I had yet to hear this one, so I decided to check it out. As Jack's Shoreline Bait and Tackle has be inundated, and I didn't think likely to confirm or deny another story, I went to Chris Megan, publisher of On The Water, to try to get to the bottom of this. If anyone in the area had an inside line, it's OTW. Following is the reply I received today:
---------------------
Brian,
Most digital scales of the magnitude at Jack’s are pretty dead on, but that being said the scale had not been certified in the last year. The IGFA only requires that the scale be recertified as soon as possible and then they review any differences if the scale was off.
As I understand it, the scale was recertified and came out to dead on with NO need for recalibration so my understanding is that the scale will not be an issue with the IGFA.
Either way, this will all play out during the IGFA investigation of this pending world record, but I don’t believe the scale was a problem based.
Hope that helps explain at least the scale issue? 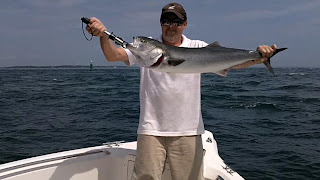 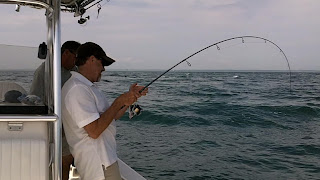 Had a great day out on the water today. Fishing w/ Jack Balint and my friend Dave. Left Stonington at 7:00. A bit late but the tide was changing earlier and I wasn't doing a night trip. Ran straight out to Watch Hill reef and picked up a half dozen stripers on Zoom Flukes. Only one keeper size around "30. As that died off by about 8:00, we ran up to Race Point and the tide was changing, but the bluefish bite was slow. Headed to Little Gull, fishing the Race side and then the sluice between LG and Big Gull. Bite was picking up, but as the tide got going, the water got really murky. Last real move was down the race where the bigger blues were just lit up. As you can see from Dave, we were fishing light w/ soft plastics, making the catching fun. Caught a lot! Dave's been out three times with me, and all three were good days. Once on a cod trip 'Lung set up, a ridiculous striper fest before a major storm, and yesterday. HE'S HOOKED!

ON THE BONITO QUESTION
Have not heard one credible source saying they were in as of yesterday. One nameless charter captain was claiming he was catching a few days ago, but my source says his boat was in that whole day in question. Sounds like he was looking to drum up business. ANY TIME NOW. Albies should follow.

OK. Here's the shoreline report for 8/3/2011. On the water for the "magic hour" before sunrise with a few quick hookups right out the gate in Niantic. Lot's of schoolies feeding on small bait. Hung out at the top of Niantic Bay until the tide began to slack, and then headed over to Goshen Beach/Harkness. Tide was just beginning to turn and I quickly hooked a small schoolie followed by a 32" striper on tube and worm. That seems to be the ticket as far as artificials go right now. Overall, I had a half dozen stripers in Niantic and Goshen, but only the one keeper. By 7:30, the stripers had disappeared and some blues were starting to show off of Little Goshen Reef. As the tide and rip was building, I stayed in. Outer Bartlett's was filled with birds and bait as the tide got going, but again, I was left on the sidelines in my little boat. Ran back to the outflow and hooked a few blues, and tried Black Point before heading in. Day was pretty much over for me by 10:00am. Not a bad morning!