Tuna Fishing on the Skip-A-Dory 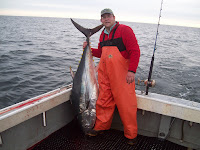 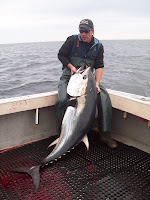 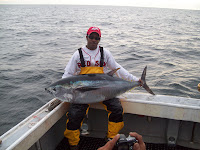 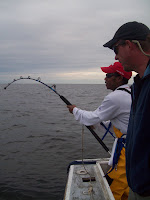 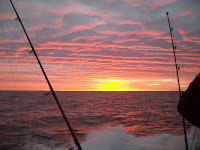 Tuna Hunter has sworn that he has never had a bad trip with Capt. Chuck DiStephano on the Skip-A-Dory out of Boston, so when he called about a last minute trip (last minute being "Can you be at my house at 1:00am tonight") I couldn't say no. After our scheduled trip was blown out by the finicky New England October weather, a cancellation was going to put us in a weather window to have a shot at some big tuna on standup tackle. Sucks for the poor sods who cancelled their trip! Leaving Hartford a bit after 2:00am, we arrived at the Skip-A-Dory around 4:15am, where Capt. Chuck and our mate Tim were ready to go. One look at the boat told me this trip was about serious fishing only. She's a working class 36' down easter with tons of space for stand up fighting.
After a run out to Stellwagen and little action other than blues, lines were hauled in and we made a run all the way down to P-Town. The run was worth the wait, as not long after putting out 2 live lines and a kite, TH had the first of our fish on the line. After a good fight, he boated a tuna just under 47". More boats began arriving on the grounds, trolling spreaders and jigging. Hookup #2 was all mine. I've caught lots of smaller yellowfin in the Carolinas and Greece, but this was the first big tuna I'd fought. The sound of line burning off the reel is sweet music to my ears, and for a while, that was the story. Get a little, lose a lot. Anticipating smaller fish, I had gone with my smaller belt rather than the larger Briad belt that rests on the thighs. Big mistake. I spent the next 30-40 minutes with crushed nuts. Finally seeing some color, what I landed was a 69", 205-210 lb. tuna!
I was pretty stoked, but the fun wasn't over. A third line was crushed by another big tuna. At this point, the only thing we could keep would be a 73+" fish that would sell commercially, and this fish was fighting like it had the size. Charles, then TH and I all had a go before it finally came alongside the boat. It was big, 70+, but just short of the 73" minimum. After a good fight, this fish was released to hopefully grow to be one of those giants.
With a 150 gallon coffin cooler full of bluefin tuna, I can now join TH in saying, "I've never had a bad day w/ Capt. Chuck." In fact, I had a spectacular day! Many thanks to Chuck and Tim, and I look forward to fishing on the Skip-A Dory again next season.