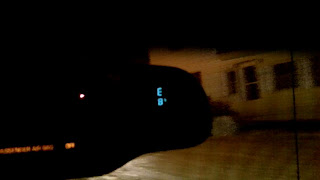 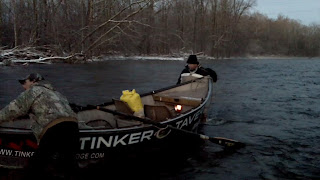 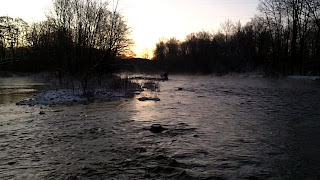 Sometimes you're catching, sometimes just fishing. This past weekend I was freezing while fishing. I arrived in Altmar, NY Friday night with plans to walk in and fish Saturday and run a drift trip with my brother Doug and Scott Glazier from Tinker Tavern Guide Service on Sunday. Scott had called mid-week and asked if we wanted to fish Saturday as he had an opening. Unfortunately, Doug couldn't get away from work early enough, so I stuck to my original plan. Saturday morning was cold, about 24 degrees when I started fishing at 8:00. The river was running at 750 cfs, up significantly from the 250 cfs in October. The low water in the fall really took a toll on the salmon. The morning was slow, as I only landed one brown and lost a pair of steelhead. Some coho were lingering in the cutouts, but they weren't long for this world. I broke off for an early lunch, hoping to meet up with Doug and get back out for the afternoon. About 2 o'clock I finally heard from Doug. He hadn't left Philly. I threw in the towel on the afternoon, figuring I would be out 9-10 hours on Sunday. After all, we would have the mobility of a drift boat, and should get a lot of hook-ups. Was I wrong! We awoke to 8 degrees, a flow of 1800 cfs, and fish that didn't want to know about anything we threw at them. We didn't get a nibble from 7:30 until almost 3 o'clock. The sharp drop in temperature and significant increase in flow seemed to just switch the bite off. While fishermen were clamoring for an increased let-off in October, the sudden change was killing us Sunday. We had a short flurry near the end of the day, with Scott and I both hooking fish and losing them. Mine took off down stream along a particularly treacherous wading area, eventually taking out 40-50 yards and never turning before finally spitting the hook. That was it. My one shot at a steelhead for the day. Looking back though, who can really complain about a weekend of fishing, five hours and a world away from all of the crap of daily life?
Posted by RNA at 8:21 PM No comments:

John with a slab.


Last day on the CT River for 2011. Went out with my friend John, aka Meatloaf in the fishing world. Love fishing with him, but haven't been able to coordinate a trip in ages. Left him a message last night, and he showed up this morning. We were hoping for some big pike, but settled for catching crappie. It was COLD. Couldn't caste well for much of the morning as the line and eyes on my baitcasters iced up. Braid + Baitcaster + 20 degrees = frustrated angler. With no pike action in Chapman's or the outflow, I switched to my 6 year old's Ugly Stick combo and small shiners. Felt like a kid again. Had fun catching crappie for some time before giving the pike a last shot. John's 7-8" shiner got absolutely hammered, and he did a bassmaster hookset that broke a knot. As far as you guys know, that was a 4 foot pike. No huge fish, but it turned out to be a really enjoyable finale on the river.