Fish are starting to work in closer to shore.  Went out of Niantic last night at 6:30, fished 'til 10:00, landing a few schoolies and blues on tube and worm and Zoom Flukes.  It was foggy, so I stayed in Niantic Bay and Jordan's Cove.  I had hoped to fish further east, but with larger boats heading out through Two Tree channel, I decided to stay out of the way.   Didn't need to get run over or swamped at night in the fog.  There were a lot of tailor blues at the top of Niantic Bay, and I was having fun catching them on a light setup.  Pulled the boat out, slept in my truck 'til 3:30, and went back out at 4:00 a.m.  With favorable tides and no wind, I had hoped to fish inside of Bartlett's and Two Tree Island this morning, but once again, fog made that a risky call.  The water was calm, and I have GPS, but you just can't account for other idiots.  Instead, I ran up to Black Point, where I landed the nice striper below.  The bait is in, and the fish have to be settling in to Bartlett's, Two Tree, Harkness and up in the Stonington area.  Can't wait to fish again Monday and Wednesday! 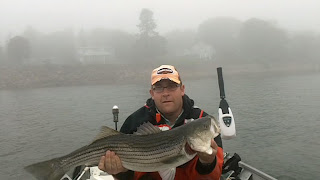 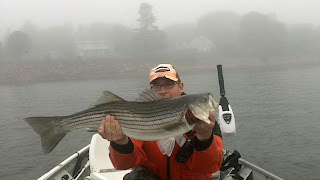 The Race is On

Went out this morning on the Blackhawk, hoping to pick up some stripers in the Race, as my little Gemma Rose can't venture out that far.  The last few trips they had limited out by mid-morning.  Weather was beautiful, too good for an early spring day with lots of guys itching to get out.   Before we left, Capt. Greg warned us that the fish were in, but holding in relatively small areas, and once large numbers of boats got on top of them, the bite was done.  We had the entire flood tide, and were on fish pretty quickly about 1/4-1/2 mile away from the 3 dozen closest boats.  We weren't slamming them, but several keepers were coming over the rail per drift.  I had a decent fish that ended up being the pool winner.  However, after half a dozen drifts, every boat within sight was motoring towards us.  As predicted, that was about it for the decent fishing.  By about , we were surrounded by dozens of boats.  We moved, picked up a few more fish, and drew another crowd.  It wasn't as busy as it gets at the height of summer, but the blues are in thick by then and less bothered by the number of boats.  If you have a boat, the fishing is really good right now weekdays early am or late in the afternoon to evening.  I have a coworker who has been catching steady keepers on the north side of Fisher's .  I plan to start fishing there soon.  From here on out, I try to fish weekdays and nights.
Probably won't get out again 'til after Memorial Day, as it is by far the worst weekend of the year to be on the water.

CT River Honoring Veteran's Striper Tourny - What a day!  I can't remember when I've fished so hard for such little return.  It was definitely a day of fishing as opposed to catching.  I went back and forth over whether to fish out of Wethersfield or down at the mouth of the river.  I ultimately decided to head south, despite all of the nice fish Slinger and Lung have been posting from the Hartford area.  While the southern part of the river has been more miss than hit, I was hoping that a few really big linesiders would be lurking along Great Island.  Conditions were nice, overcast with the largest full moon of the year hidden behind the clouds as I launched just before 4:40am from Salmon Cove.  I ran south, prospecting at a few places where I'd had success in the past, but had no luck.  Picked up my first schoolies around the RR bridge by the DEP headquarters.  There was a ton of bait in the mouth.  At various times I had bunker and herring breaking all around me, but despite throwing just about everything I had (artificials only, no live baits allowed), didn't find any stripers.  I covered Great Island, the mouth, across to South Cove (We couldn't fish past the breakwall) and back up to the bridges with swim baits, soft plastics, tube and Gulp worms, etc.  The guys out fishing live baits weren't doing any better.  I finally got fed up and called it quits a bit after noon.  My "big fish" was only 24-25", though the leading catch at that time was just 31".   I guess the place to be was actually out in the LIS, where guys were hammering stripers all weekend.
Posted by RNA at 4:18 PM No comments: