If you're viewing my blog (or Facebook), send in some fish pics. I'd especially love to see some from the viewers outside the US!!

https://www.facebook.com/TheRedneckangler/
Posted by RNA at 7:52 PM No comments:

A Great Read - Hatteras Blues: A Story from the Edge of America by Tom Carlson 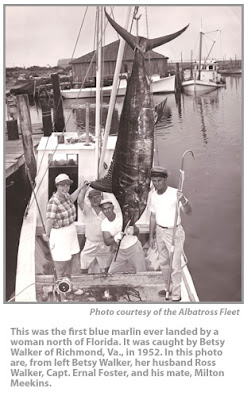 The days are getting shorter, the weather snottier, and opportunities to get out and fish the salt water are quickly dwindling. Before too long, the winter will be descending, and I will begin a protracted battle with cabin fever and a longing to head back south. Occasionally, I may sneak in a trip, but more than likely I'll be holed up, hoping for an early spring. It's a great time to get in a few books, and I love a good story centered around the sea. Several years ago I picked up Hatteras Blues: A Story from the Edge of America by Tom Carlson. It's the story of a place I love, where my own family connections run back generations.  It's the story of the birth of sportfishing in the Outer Banks, as a local Ernal Foster decided their might just be something in taking folks out to fish charters. My Aunt Betts was the first woman to land a marlin fishing out of the OBX aboard the Albatross with Capt. Ernal in the early 50s. The book chronicles the history of what was a tiny, isolated village and its people, tied to the sea, and it's evolution into one of the sport fishing capitals of . Hatteras Blues is a nautical history of perseverance in the face of war, natural disasters and changing times, the struggle of a traditional way of life dependent on the seas against times that seek to bulldoze the past and replace it with McMansions. Tom Carlson has written a page turner that follows the Foster family through all of this. I loved this book and it instilled in me a need to get back down to the OBX and take a trip with Capt. Ernie, now himself in his 70s, to capture a bit of a bygone era of fishing, which is a whole other story!  If you're going to be holed up for a spell this winter, give Hatteras Blues: A Story from the Edge of a read.  I think you'll enjoy it. 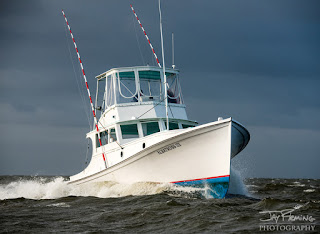 http://albatrossfleet.com/home.html
Posted by RNA at 9:56 PM No comments:

The fishing industry seems awash in soft plastic products from both major manufacturers and smaller start-up companies.  Everyone claims to have something special. I think the guys from Plum Island Swim Baits really do.  Let me preface this by saying that I fish a TON of soft plastics in both fresh and salt water. I live less than a mile from Lunker City, who’s Sluggos have been a staple for years.  I have literally bins full of soft plastics from dozens of manufactures. Some stuff is great and will always be in my bag or on my boat, others not so much so.  So why have I fished Plum Island almost exclusively this season?

I picked up a few packs of Plum Island River Eels 7.5”, Flukushima OGs and Flukishima Mondos this spring after seeing a few online posts about this local company that was making some great soft plastics. With every soft plastic, the balancing act comes between a bait with great action and durability. The stuff with the best action is typically really soft and tears up pretty quickly.  Super durable often equals too stiff and a lot less action.  Plum Island seems to have hit the nail right on the head. Their baits have great action in the water, feel super soft, and are tough as nails, often holding up to a day of striper fishing or numerous bluefish strikes.  Did I mention that they are scent impregnated as well? These things are not your rock hard GULP baits! 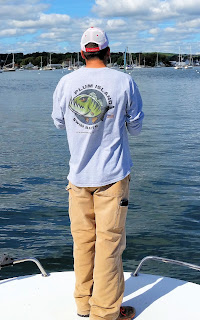 It turns out that one of the guys behind Plum Island, Gabe Ravizza, lives ten minutes away from me, and invited me over to check out some of the stuff they’ve been working on.  We talked fishing for awhile, and I left with a goody-bag of soft plastics, including a bunch of new designs and color combinations.  Among my favorites were some of the albie baits that were absolutely slaughtered the last few weeks. I’m sure you’ll be seeing some more of these next fall.  I had the chance to get out on the water with Gabe this past week, and try out even more styles and color combinations on fall run stripers and blues.

The list of shops carrying Plum Island Swim Baits is expanding , though Gabe emphasized their commitment to maintaining the quality of the baits over the growing shop demands for expansion.  Want a custom color combination? They can probably do that for you as well. Check out Plum Island Swim Baits.  You won’t be disappointed. 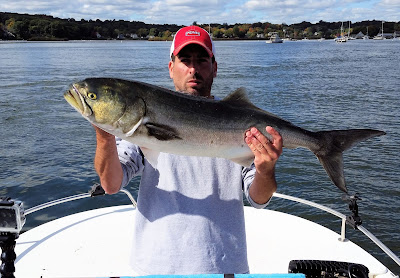 Take a look at the Fishin' Magician's Skid Stik lure as I fish it for stripers in the mouth of the Connecticut River.
Posted by RNA at 1:56 PM No comments: