The continues to give up nice fish, and this weekend I was able to put my friend Mike on several of them. Mike really helped me get started on the hard water this winter, so I was pleased he was able to hook into his first keeper stripers aboard the Gemma Rose 2. The bunker in the lower river were nowhere near as think as they were last Memorial Day weekend, but there were still plenty to be had and stripers lurking beneath. 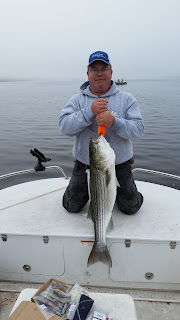 We began the day at , tossing jigs and top waters in a thick pre-dawn fog. Mike was the first on the board with a pair of fish bouncing his jig along the edge of some flats. I considered a switch as my Sluggos were initially drawing blanks, but a cast towards a big swirl landed me my first fish in the mid 30" range. Fighting the fish in the fog, I had no clue we were drifting right up into a foot of water on the flats. By the time I realized, I had lost all sense of direction and we ended up poling around in circles for a bit. Just as we were considering a move, I got a second fish, this time a huge top water explosion on my Sluggo and a 39" beauty.

The morning top water bite has been a brief one, so before long we were headed north in search of big bunker schools and bigger stripers. Two stops on an incoming tide produced several fish on chunked bunker and fish finder rigs, including Mike's first keepers. I'll tell you, I get pretty pumped watching other guys land fish on my boat, but I think Mike had me beat. The action picked up as we neared the end of the tide, and we started to lose count of the fish we were landing. A few channel cats decided to partake in the free buffet, and for awhile, they bounced between rods sucking down chunks. 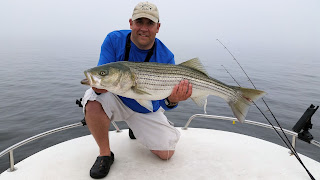 I'd been waiting for the tide to swing to hit my last spot of the afternoon, as it has been a steady producer on the outgoing tide. Today didn't disappoint. A steady bite produced several more good fish, including a FAT 36" striper for Mike that just dug down into the current and didn't want to know about us. That fish almost had me dropping off the anchor to chase before Mike finally got her turned back up river.

I'm not sure how many more days I'll have up in the river before I move out to start fishing the reefs. I know some cows are starting to settle in along the points. With thunderstorms forecast all day tomorrow, this could be one of the last for awhile. If so, catching a lot of fish with a great co-angler, it was a good one to finish up on. 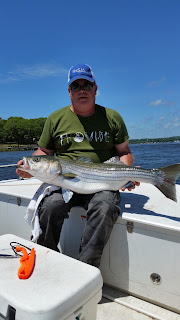 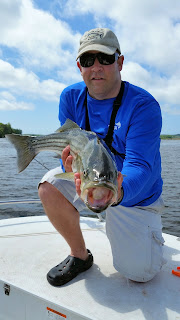 
Find the bunker, find the fish. Open expanses, below tributaries, seams below islands, etc. Drifting live bunker, make sure to clip fins. Fishfinder rigs with BIG chunks of fresh, bloody bunker. Change your baits often. 20-30lb. Momoi Diamond Hi-Vis Yellow line for multiple spreads. This makes it easy to walk fish through a spread without always bringing all the lines in. 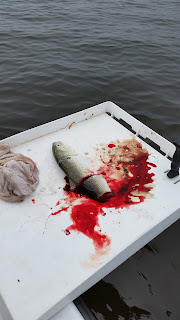