Connecticut and Rhode Island Fishing Report 11-29-12
Posted by RNA at 4:09 PM No comments:

Partisan bickering is holding up the bi-partisan Sportsmens Act of 2012. Speak up now, or more land and waters will be closed for good, restrictions will be put in place, and we, outdoor enthusiasts who contribute over $90 BILLION $$$ to the economy AND the environment, will be left on the sidelines. I rarely mix fishing forums and politics, but here I have to speak out. Please go to Keep America Fishing and Act now. Keep American Fishing - Save the Sportsmens Act Both CT Senators have voted to move the bill forward, so send correspondence to Sen. Mitch McConnel, Republican minority leader at. If more people don't act, we may as well trade in our rods for binoculars, because we will all be reduced to bird and whale watching!
Posted by RNA at 5:42 PM No comments:

An Important Effort to Preserve Menhaden

Check it out and let your voices be heard! www.menhadendefenders.org
Posted by RNA at 7:40 PM No comments:

Made it up for a one day trip Sunday! Weather was fantastic, which brought everyone out to take advantage of that last chance before the cold. It was ridiculous. Saw tons of walk-ins in places you rarely see many, even during the crazy salmon runs. Fished up top in Altmar with Scott and my brother. 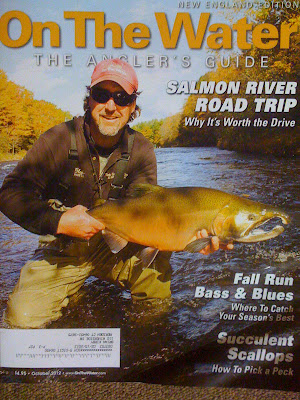 With flows around 250cfs and about a million people, the steelies were there but really turned off. After a slow start below the schoolhouse, Doug hooked and landed his first and only fish. 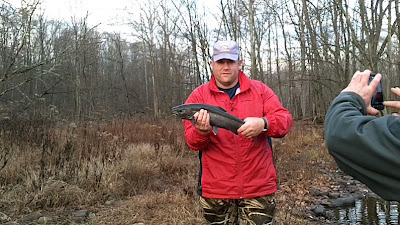 Doug needs to work on his fish posing, but at t 320lbs., it's hard to make a fish look big.

The fish were stacked in a tight location, with one guy on a float rig able to take advantage. We were in an ideal position to run a center pin down this seam, but it would have screwed everyone on the opposite bank. I stuck to flies and rubber eggs all day. The good thing about drifting is that nobody walks in to the side we were fishing, and we worked pretty well with the guys across from us to stay out of each other's way. Hookups were just about non-existent, so we decided to jump ahead of the other drift boats, moving well down from town. It was literally elbow to elbow down through the trussel. 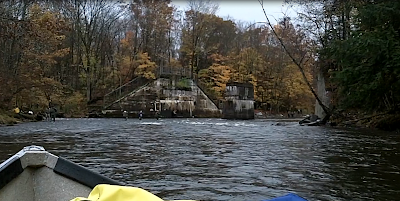 There is one line for drift boats to take, and once you commit, you're in. Some guy hooked a fish between the center truss and the right bank after we'd started in. Not sure why, but he tried to submerge his rod tip and line rather than using his 11 ft. rod to elevate the side so we might have had a chance of going under. Needless to say, he lost his fish. We could still hear him a half mile down the river. Word to the wise. No point in casting once a boat is approaching that line of white water. It's not going to stop. We got ahead of the other boats to a location that is inaccesible to walk-ins, and set up shop for the rest of the afternoon. The bite was still tough, and I only had five shots, landing one. However, that was 3-4 more than anyone else in the area. Doug never hooked another fish, but he was fishing with spinning gear which really limits the volume of casts and thus the percentages of getting a hookup. I had all of my hits in about a 5 sq. ft. strike zone. Even losing those fish is a pretty awesome experience. I had a few take 50 yard runs on me in seconds before flipping a few times and giving me the f you. The only thing I've fished that is as angry as these things would be tarpon. Think of an albie run with a sailfish tendency to go airborn. It's a blast. Cant wait to get back up in a few more weeks, onnce some snow has hit the ground, and the temperature dropped to chase away the crowds. 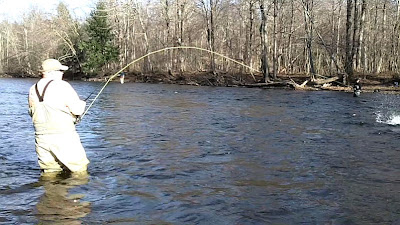 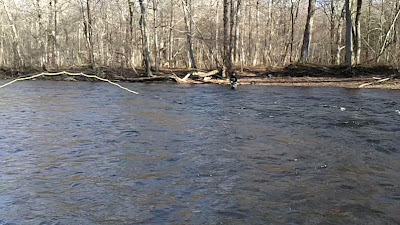 Notice the line slack. This is the "Oh, sh*t" momement that typically comes with fishing steelies. :D It takes a lot of these to produce one of the pics below. 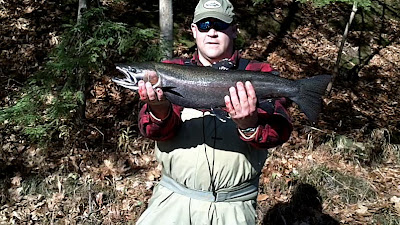 http://www.onthewater.com/fishing/rhode-island-surfcaster-catches-58-pound-november-striper/
Posted by RNA at 5:42 PM No comments: