I don't have enough good things to say after a day of fishing in torrential rain in my new Frogg Toggs Hellbender Wading jacket.  at CT Outfitters put out a special pre-order, and given my satisfaction with their other products, I jumped on this one.  My boat never leaves the dock without the All Sport Rainsuit stowed away for those unexpected storms, and I liked this so much I have a second set in Realtree camo.  In addition, my ToadRageJacket has served me well over the past several seasons.  The Hellbender is another product that improves their the Frogg Togg lineup of great products and affordable prices.  The Hellbender has everything I would expect in a jacket 2-3x the price.  I'm a big guy, and the 2XL was roomy and flexible for a full day of unencumbered casting.  It's got loads of pocket space and D-rings to attach essentials.  The neoprene and Velcro cuffs keep water out, and after 8 hours of steady rain last Sunday, the interior of the jacket was bone dry.  I could zip and button up to my chin without chaffing, and the hood was just the right size.  The exterior is the tough ToadSkinz while the interior is the familiar non-woven material from the original rain suits.   If you want a wading jacket that offers a ton of bang for the buck, check this one out! 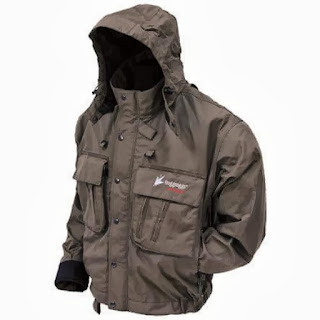 Tautog Fishing Tips for the Fall

Tautog Fishing Tips for the Fall
Posted by RNA at 10:40 PM No comments:

Well, I've fished the Gemma Rose II for almost the entire season, and I have to say, I'm very pleased with my purchase.  I posted my initial review earlier this year, so I won't rehash all of the reasons I chose the Triumph.  I will tell you, it's lived up to expectations in almost all areas.


Durability was a key, and by this I mean the ability to run it into rocky bottoms, from poor launch facilities and whatever else gets thrown my way.  While not a flats boat, I can still fish pretty skinny water in back bays, coves and shallow rivers.  I've put my share of battle scars on her this year, but I won't be repairing glass or gel coats! I'm far from a neat freak, and she's showing some staining on the plastic, but I can live with this. If you'd rather spend your time fishing than maintaining a boat, this is a model to consider.  She's a tough boat! 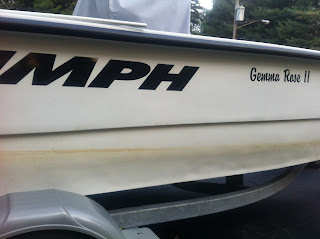 Paired with the 75hp E-Tec, the pushed 35mph overland speed at full throttle in calm conditions.   I will say that the standard console gauges are pretty useless as they never show max rpm above about 4200 and really inflate speed.  Calibrating these is not high on my list, as she has plenty of get-up and go when needed.  I typically cruise at what I guesstimate to be around 3500rpm and 25mph.  In choppy conditions, dropping down off plane to 2700-2900rpm makes a decent 12mph without taking a beating.


As the season progressed, I pushed  to see how seaworthy this boat is, and found that she can handle quite a bit of chop created by the Long Island Sounds many rips.  While I won't drift her stern into the Race, she definitely inspires confidence if you get caught out in some wind pushing against a tide.  With her weight and an 8ft. beam, I don't worry too much about taking swells from the side.  In fact, I fished her with my 6'4", 325lb. "baby" brother and I (a mere 265lbs.) against the same gunnel and didn't feel like we were going to end up in the water.  This boat feels far larger than an eighteen footer thanks to the wide beam, uncluttered layout and large casting decks.

With all the references to chop, this boat is still a skiff.  Yes, the Roplene does dampen the impact, but head on you get slapped.  The rounded bow smacks the waves rather than slicing through them.  A good console mat under foot relieves quite a bit of the jolt.  You will get wet when the seas come up, so you'll need to take your foul weather gear, but you'll also get home safely!

There are a few features I would like to see changed, starting with the navigation lighting.  Removable deck mounted pedestal lights just don't cut it in a salt water environment.  After 6 months of use, the connections are shot despite cleaning after each use.  One of my winter projects will be installing deck mounted and hard wired port and starboard nav lights as well as a hard wired pedestal light above my center console.  For easy of adding electronics, I'm also adding a bus board inside the console.  Slightly larger access hatches for the bilge and livewell pumps would have been smart.  A three-way T connector for the duel 12 gallon fuel tanks in the bow would make life a bit easier as well.  A big plus is that it is a hell of a lot easier to mount accessories in this interior with Roplene as opposed to glass.  I've read a few users complaining of screws pulling out, but have experienced no such problems. Just avoid fine thread screws.

To sum up, the Triumph Skiff is a great inshore boat, durable, roomy and low maintenance. I've had a blast in the Gemma Rose II this season!

October typically brings some of the best fishing of the year to the eastern Long Island Sound.  Bass and blues are putting on the feed bags, often in insane surface blitzes, before their migrations south.  Black fish season reopens, and anglers look to fill freezers for the winter with these and dinner plate size scup.  Bay anchovies and other bait fish choke the reefs, with albies giving chase.  Fall is arriving, and with it shifting weather conditions including increased winds and waves, making it tougher on recreational anglers hoping Mother Nature coordinates with days off.  For the past several years, a day out typically guaranteed great fishing.  While the weather has generally cooperated thus far, fishing has been a bit more hit and miss this season.  I know guys will say that they caught a ton of blues, or stripers, and maybe some albies, but the mass of fish in many of the usual places isn't what it has been in seasons past.  I've had discussions all summer about causes, but guys who fish on a regular basis will tell you that it has been tougher.  Places like the Gut, Pidgeon and the Race are all safe bets to fill coolers with blues, and porgies are hitting well on the rock piles.  Fisher's is seeing some top water striper action near Race Point and locations along the south side, but they are not the acre+ of churning bass and blues that I look forward to in October.  The reefs in the Watch Hill area have been hit or miss as well.  Sure, you can always grind out fish, but the action and numbers are just down.  This weekend I ran from Groton (CT) to .  Saturday's weather was as ideal as one could ask for, and my first stop was Watch Hill.  The tide was beginning to push in, and the fishing just wasn't happening.  I quickly decided to run east up the coast, working all the way over to PJ in my little skiff, the Gemma Rose II.  Bay anchovies are working in, as football field sized schools circled west of the break walls, with the occasional schools of albies or bonito slashing through.  Despite the masses of bait, the numbers of top water blitzes were few and small.  Hanging around the breachways is going to score fish, but I'm looking for the massive catch 'til your arms fall off October runs.  Seeing all the bait was encouraging, and I along with all of the other salt water anglers that fish the are hoping the action builds up as well.  We need our fix of massive striper blitzes to see us through to the spring! 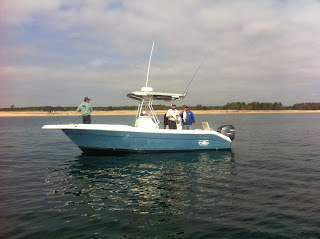 Capt. Jack "Bones" Balint put his client on some good fishing this weekend, including this nice bonito.