Great bit of knowledge that could save a day fishing.

My dad taught me this when I was a kid. Told me he used it all the time in the ER. Used the same technique to take the small treble out from above my lip (earlier post). Should have video recorded that!

Steelhead and Salmon on the Fly 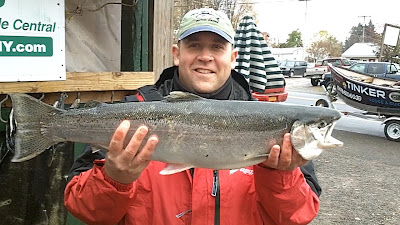 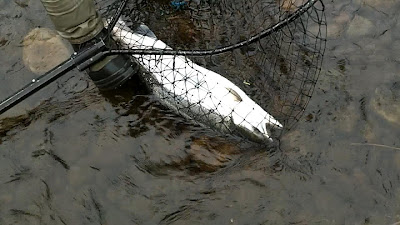 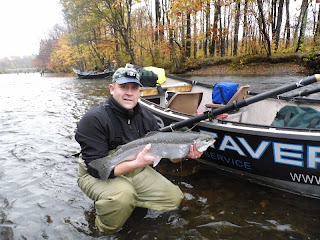 This past weekend I fished the Salmon River in Altmar, NY (west of Pulaski) with my brother Doug and his friend John. We again stayed at the Tinker Tavern Lodge with guide Scott Glazier. Scott is a full time resident of Altmar and year round guide who has been featured in episodes of OTW, so he has the detailed local knowledge to put you on the fish. I really enjoy fishing with him and highly recommend his service. This was my first trip to target big salmon, as Scott had recommended late October as the salmon are still in the upper sections of the river, and a large population of fresh steelies would be working their way up as well. I made the 5 hour drive up Thursday evening, fished on my own Friday, and managing to hook into some salmon and do a bit of exploring. Fish were stacked in several locations. My knowledge of both the area and fishing methods is still pretty basic, so I quickly found myself running out of what the fish were hitting on, and carrying lots of useless gear. Oh well. The next morning we were all on the water at 4:45am to get to our first location. Fishing doesn't begin until dawn. After a short drift we reached our spot. One advantage of drift fishing is getting to spots ahead of walk-ins. We were ready when dawn broke, and so were the fish. Doug and John landed their first salmon, while I lost my first few hookups. Steelhead were mixed in among the spawning salmon, and I ripped my egg out of ones mouth. I cast back and line shout out through my fingers. As I came tight, a big chrome steelhead exploded. I rarely fly fish, and to say I'm a novice is pretty accurate. Now I'm hooked up with the ultimate freshwater target. To say I was pumped to land this fish was an understatement. Over thus course of the day I managed to hook and lose numerous fish, proving the "on and gone" is no myth. I'd definitely have to put my fist steelhead on a fly rod right up there with my first tarpon and marlin.
Posted by RNA at 10:00 PM No comments:

Montauk is going' off!

Got a call from Jack last night that Montauk was lit up with acres of bass and blues puttin' on the feedbag for the run south. Put 8 keepers in the box in 45 minutes and then it was all catch and release. Called him back this morning and he was back out there with the same results. I could hear guys calling "fish on" in the background. Either it's really good fishing, or he's trained his clients to start yelling "fish on" whenever he answers the phone. Wind is supposed to shift to the east Wednesday, which will probably put a damper on things for guys running from CT.
Posted by RNA at 9:39 AM No comments:

Thursday 9/29
A day late (or hour) and a dollar short! Kinda sums up my trip Thursday. One of the downsides of chartering is that sometimes you just have to roll the dice with dates. Can't say that we came up snake eyes, but I have fished better days. Fished with my "baby" brother Doug (in video) and Capt. Steve on the Lauren B., a veteran of these waters who will go above and beyond to try and put you on fish. We started out at Watch Hill at 6:30 in heavy fog, encountering some leftover messy swells and no signs of fish. We worked in to Sugar Reef and Wiccopesset Passage. Nada. Visibility was no more than a few hundred feet. Rather than bounce around blind, we decided to work the north side of Fishers Island so at least we would be sheltered. We worked the ENTIRE side of Fishers all the way to Race Point, picking up a few blues and getting a few bass to hit. Nothing big. Decided to stop back by Napatree and Watch Hill before heading in. Weather was clearing and the tide was beginning to go slack, but the albies were in. A guy was hooked up on a fly outfit and a second boat was hooked up as well. I missed a strike and the school was gone. Another popped up a few hundred yards away and was moving towards us. The boat next to us doubled up and then I hooked into a fish. It took two hard runs zigzagging away, and then a hard turn to the boat. I lost the fish. The tide seemed to go completely slack, and that was it. We moved over to Watch Hill where lots of birds were chasing numerous schools, but the fish weren't really hitting. I hooked and lost a second, and that was it. We were an hour past our charter time and had to head back. I'm pretty sure the boats out there would killed them as the tide picked up again.

Sunday 10/2
Went out in the little Gemma Rose hoping to catch some albies and worked from Goshen Point down to Brothers. No albies, just schools of small blues here and there, but still lots of fun.