Went out on the Blackhawk Wednesday night for a Diawa demo day put on by Gary and the guys at CT Outfitter. Unfortunately, Mother Nature and the fish gods weren't too cooperative, but we had a good time and the idea was great. We left at 4:00 as the tide was changing over and headed out to the Race. Diawa's rep (name?sorry) had provided about 20 different outfits covering there whole 2011 line (including some electric reels that sounded as if my fish finder kept going of). Not much happened during the slack tide, during which we fished some of the new butterfly jigs in the pouring rain w/ no success. As the tide began to pick up, so did the rain. I switched over to a 3-way jig setup, and quickly had the boats' second fish, a BIG blue. Pretty soon a few more stripers came over the rail. Looked like the fishing was going to heat up, but it never really panned out. A real nice fellow fishing beside me did land 2 pretty stripers, but all told probably no more than a dozen fish came over the rail before heading back at 11:00. However, the company was good, Capt. DuBrule and crew were great, and CT Outfitters put together a top notch trip. To finish the night, the pool winner collected $500 and a new Diawa Saltist outfit, a second outfit was raffled away and hats and T-shirts went to everyone. Thanks to those who put this together, and I look forward to the next trip!
Posted by RNA at 3:50 PM No comments:

Limited success last night fishing the shoreline from Niantic to Harkness. A schoolie and blues at the outflow, a barely keeper and schoolies between the sanitorium and Harkness. Got back to my night/safe spot from about 8:30-11:00 and had a few hits but no hook-ups. However, adult bunker schools the size of a football field were at the top of Niantic Bay. Wish I had a bait pen or access to one in Niantic. Snagged a few and let them limp around hoping to get a big bass, but no luck in 2 hours. Saw an occasional big tail swirl. I tried snagged bunker, big pre-rigged hogy eels, a large bunker swimbait, smaller lures, trolling through and around the schools and nothing. I guess the stripers that were there had so much bait to choose from that it was hard to get a hit.
Posted by RNA at 11:49 AM No comments:

Email ThisBlogThis!Share to TwitterShare to FacebookShare to Pinterest
Not to be outdone by her little brother, Gemma joins us on our next fishing outing. 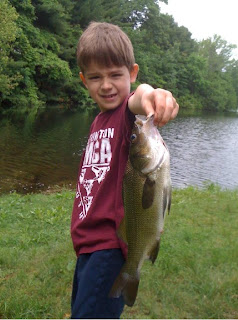 Two AWESOME afternoons of fish slammin' fun at Camp Sloper. Danny racked up a 2 day total of 10 largemouth, a monster white perch, and a sunny! KVD watch out.

Striper Fishing has Lit the F*@^ Up!

The striper fishing was lit up, both literally and figuratively last night and tonight. After a 3:00pm put in on the start of an outgoing tide in Niantic yesterday, fishing went from slow to good. I'm pretty limited in where and in what conditions can fish my little skiff. Had a few blue blitzes and 4 short stripers on the outflow from 3:30-4:30. Working up Two-Tree, Bartlett's, Harkness and back to Black Point was completely unproductive. With storms approaching, I decided to head back into Niantic Bay and hit a few spots I like. Trolling T&W I had a strike within a 100 yrds, and thus began 2 hours of catching 25"-27" stripers with one monster that ripped the road out of the holder (ESPN worthy highlight catch on my part) and spooled my light trolling rig almost twice before breaking off. Couldn't sleep until 2:00am thinking about the hardest hit and run I have experienced in a while. Tonight we decided to cheat Mother Nature again, and left Stonington at about 4:00 just as high tide was peaking. Fishing with Jack Balint from The Fish Connection in Preston, whom I fish with several times a year and always have a great time. Jack specializes in light tackle and fly fishing, so we were working with GLoomis Pro-Green rods, light Stradic and Penn reels, 12lb.test and 7" pink and amber sluggos. Plan was poke around from the east of Fisher's until the tide picked back up, but 5 minutes out of Stonington we were on the fish. Right off the bat I was into a fish in the mid-30's (inches) and it kept going from there. Even as the tide went slack, the fish kept biting. You could see stripers on squid and ink blotches as the squid sought to escape. It was easy to follow the sluggos and see the fish moving in for the big surface strikes. It was a race to see how much fishing we could get in with the massive storm bearing down on us. Completely lost count of the fish landed in the 2 hours before a mad dash back to the barn. Most were in the mid-30's. Can't imagine (well, I can) what a few more hours at that pace would have been like.

Take a Kid Fishing (at your own risk) 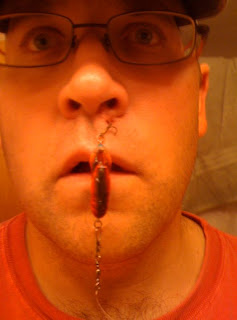 Stopped by my local pond to wet a line. Caught a few nice little bass. Little League was going on nearby, and tons of kids were running around. A boy from my daughter's 2nd grade class and his friends came up. "Can I fish, can I fish, can I fish?" Who's going to tell a kid he can't fish? I have him pick up my light rod with a small lure, and he casts out a few times. I turn to cast my line and WHAM! I reach down and find the lure hanging from my face. The kid was 25ft. away and probably couldn't hit me again in 100 casts. He's is about to cry, saying he's sorry over and over. I assure him that I know it was an accident and that it's OK. This is where it gets comical. I can't see the hook and forgot my pliers. I have to walk past all of the kids and dads by the baseball diamond with a lure dangling from my face. They politely offer to help, but there isn't anything they can do. I decide I'll stop by the rescue squad across the pond. Surely they have small pliers or forceps. I am informed that they are not allowed to remove anything, but only after 3-4 guys come out for a look. I understand that some jackass may try to sue and thus the policy. They do offer to take me to the ER, but I don't think this merits a ride in an ambulance. I drive home with my rather unique piercing hanging from below my nose. Forceps and a quick pop takes remedies what turned out to be a rather humerous situation.
Posted by RNA at 6:38 PM No comments:

After a few slow weeks of picking off of beds, Hanover is starting to heat up a bit. John, Tom and I went out Sunday, where Tom was the lone fish catcher with a small bass and a catfish. Went back out today and had three decent bass on (lost 2) in about 45 minutes using a Lunker City Salad Spoon on top. Two guys were also working the Hanover Ave. side in a boat. Looking forward to the LIS turning on!
Posted by RNA at 9:27 PM No comments: