I posted this on another site, but thought I'd throw it up here as well. The environment in CT is a LOT different than back down south. I spent yesterday evening at my monthly rod and gun club meeting with Tom Donlon from the CT DEEP discussing hunter recruitment. The overall numbers lost each year are more than sobering. At the rate of decline, there will be nobody left to fight for rights in another decade. Despite comments I read about cuts to programs, the CT DEEP DOES have federal funding and NRA support for hunter recruitment programs, BUT they need every hunter to get out there and recruit at least one new person this coming year, and not someone who has family or other connections to hunting already. Clubs and hunters need to recruit outside of their traditional membership base. CONVINCE YOUR HIPPY NEIGHBOR WHO BUYS $25 FREE RANGE CHICKENS THAT HUNTING IS REALLY THE MOST ETHICAL AND HUMANE WAY TO HARVEST MEAT, AND GET HIM OR HER OUT IN THE WOODS. DON'T START HUMMING DUELING BANJOS EITHER!!!! WE WANT TO ENCOURAGE THEM, NOT SEND THEM SCREAMING BACK TO STARBUCKS. Letters to reps are great and need to keep coming, but either recruitment happens, or you can count on more and more legislation to eventually cut hunters out of all public lands here in CT.

is a beautiful state to which tourist flock year round for it's history, scenery, beaches and mountain resorts, but would you put it on your bucket list as a top fishing destination? I may be a little biased, but for my money, has one of the most diversified and exceptional fisheries anywhere in the nation, and I've fished just about everything from east coast to west, north and south. You can fish pristine mountain headwaters for wild brook trout, a world class largemouth bass fishery at or the , trophy catfish on the James and , 50+lb. rockfish/stripers in the , or venture out into the blue water for sails, marlin, wahoo and more. My only dilemma is choosing what to fish whenever I head back down to visit family. I just haven't found any other place that offers such a broad range of exceptional fisheries. I often write about blue lining up in or chasing big blue cats on the James, but these just scratch the surface. 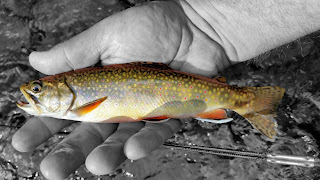 One could easily plan a week long, source to sea fishing trip on a very modest budget. Nonresident licensing fees are pretty reasonable, and permits to fish the federal lands are free. There's ample camping throughout the state in the numerous state and national parks.

You'll find headwaters of the and in the western mountains, with cool spring fed streams and tributaries that fish well year round for trout, while the main rivers also hold smallies, largemouth, muskies and more. I take my 2wt glass rod and run the fire roads up into locations where you can fish all day and never see another human being, or drop my yak into the South Fork of the Shenandoah to chase smallmouth and the elusive muskies. My favorite shop in the Valley is Mossy Creek FlyFishing, and their site provides a wealth of information.

If trophy largemouth is your thing, plan a day on either (frequent stop on the pro tours) or . Both have the added bonus of landlocked stripers as well. To the far south, you have the Roanoke River/Kerr Reservoir and . All of these are large bodies of water for which a boat or kayak would be needed, and there are plenty of rentals available if you don't bring your own, as well a fishing guides who will provide everything you need, most importantly their knowledge of the local waters, for your outing. 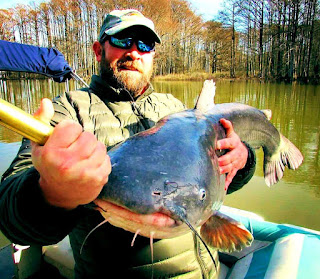 As you head down into the tidal regions, particularly the lower James below , trophy blue cats await pretty much year round. Did I mention that there are bass in the high single to double digits on the ? Though I grew up on the , I've still got to give the nod to the mighty James. While you're in the area, spend some time in itself. The Civil War history, brew pubs, and restaurants in the old tobacco warehouse district shouldn't be missed.

Finish your trip off in the salt, either in the Chesapeake Bay or booking a trip out of the VA Beach area for some screaming drags on big pelagic beasts. The early spring and late fall to winter provide shore and kayak anglers shots at rockfish/stripers into the 50+lb. range, and summertime brings flounder, croaker, spot, specs and increasingly reds and cobia. There's a little bit of everything. Again, you can shorten the learning curve by booking a guide.

The Department of Game and Inland Fisheries is a great place to go for both ideas and all the information on licensing, etc. I'm more than happy to point people in the direction of some of my favorite shops, guides and locations. 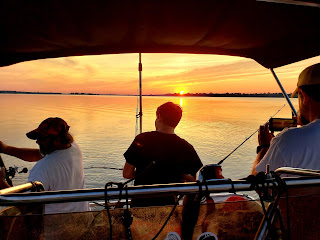 Again, I've only just put a dent in what's available to fish in . I always look forward to getting back down and packing as much as I can into every free minute, and never have close to enough time. What are you waiting for? Load up the truck, the camper or whatever, throw the yaks on top, and head to for a week of fishing!

FlipRocks - A new option when wet wading, chillin' on the boat, or just around town. 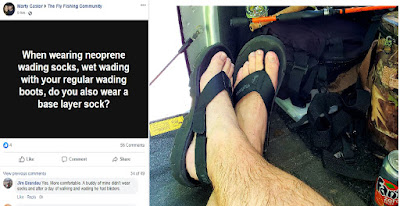 I recently came across a post on The Fly Fishing Community about wet wading in neoprenes, socks or some combination there of. Well, this season I've been wearing FlipRocks much of the time, so dilemna solved. The guys behind FlipRocks have taken our favorite summer footwear, flip flops or sandals, and added a removable base with rubber, felt, micro-studded and cleated options. You can even do a Rock Treads bottom! I was surprised at how grippy the changeable soles are. You really have to tug to get them off, so there is no worry about an inadvertent loss of a sole. The FlipRock model shown are super comfortable, have a toe protector and a back heal strap which I love. I've been wading, kayaking boating and just running around town in them all summer. My wading boots have largely sat in the back of my truck. They make a sandal model as well. If you looking for a do-it-all summer footwear, give FlipRocks a go! 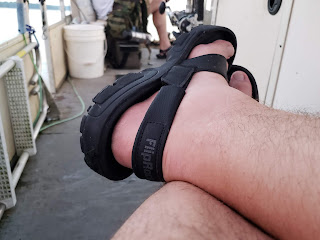 Virginia has joined North Carolina in taking unilateral action to partially close down rockfish/striper fishing. Several other North East states are exploring additional options. all of the data indicates we are approaching a critical point near the edge of that same cliff we went over in the 1980s. Have we learned anything since then? I certainly hope so.

Maryland Says', "F*ck Everyone Else."

Maryland has a terrible record when it comes to protecting resources such as the rockfish/striper fishery, and while other states are beginning to take unilateral action, Maryland is foot dragging as usual.

The following link is to a recent op-ed in the Baltimore Sun by Mark Eustis who has for years been advocating for better policies to ensure the sustainability of our fisheries.

For some of the most important and insightful, up to date information on the state of our striper fishery, I follow American Saltwater Guides Association. We're at another really pivotal point in the future sustainability of these fish, and I'd like to leave a thriving, healthy population for future anglers. 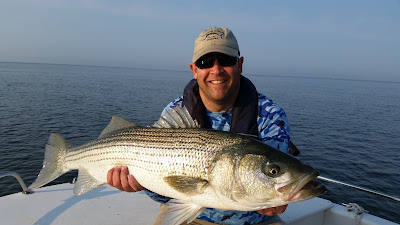 No fishing trip is wasted. Of course I want to catch fish, but on those outings when I don't, there's always something of value. Whether it's a new environment, striking up a conversation with fellow anglers during a slow bite, or just soaking in the surrounding scenery on one of the first truly spring evenings, I always leave with something that makes the effort worthwhile. Saturday evening provided all of the above on an outing that didn't produce any of the big, brown that I was hoping for. 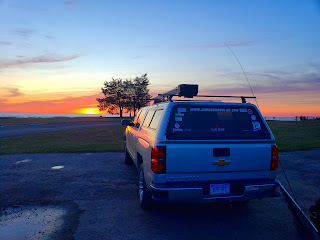 My brother, son and I had already faced a tough day steelhead fishing with high, muddy waters on the Salmon River, and looking for an alternative to the jam packed tribs like Orwell, I decided to take a drive over to Selkirk Shores State Park, as word was there was a decent brown bite from shore that morning. Doug wanted to stay in and watch the Richmond NASCAR race, and Danny just wanted to catch up on sleep, so I headed over on my own to catch what I hoped would be a last light bite. 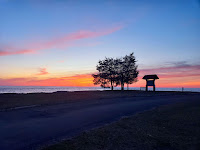 I arrived to find a few guys set up and fishing, along with the dog walkers and families out taking advantage of the first warm weekend of the year. I was rigged up with a 3/4oz. blue and silver Cleo, with an assortment of other colors and sizes in my bag. The only crowded spot was the end of the concrete jetty, but there was more than enough beech for the half dozen of the rest of us.

I'm perfectly happy to find my space and fish in solitude, and I'll rarely approach anyone else that looks to be doing the same. I appreciate the fellow anglers who give a nod and a greeting but then finds their space and doesn't continually invade the peace and quiet. At the same time, on a slow night such as this, when I step back from casting and take a pause, I'm more than happy to jaw with other guys out looking to do the same. I've met some of the most interesting folks from all walks of life hanging out on beaches at times like this. I can talk fishing with guys I've just met like we've been friends for a lifetime. Some I'll see out again, a few I'll actually end up fishing with quite a bit, and many I'll never see again. 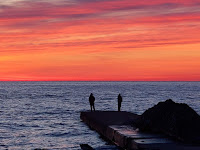 This particular night it was a young guy from with his Dad from out of town, both looking for any advice I'd share, and a local guy Dale who works at Pineville Sporting Supply right down from where I was staying. Contrary to what many on the internet might have us believe today, fishing advice is not like Cold War espionage. It's OK to give as well as receive. That's how we've all gotten to wherever we are today. Hopefully, the father/son team left with a few ideas for the rest of their trip, and I certainly soaked up what Dale had to say about fishing the area. The fact that I didn't land a brown did not diminish the evening one bit. 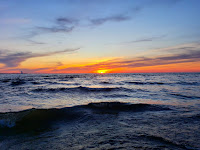 So my advice is this. Don't measure every trip by how many or how big the fish were that you landed. If that is your sole yardstick, you will find disappointed when you need not be. Look forward to and enjoy the entire experience. Landing that monster fish or hitting the blitz just makes it that much better. And you know what they say. "If you don't catch fish, take sunset pictures." Enjoy the sunset photos :)