A little high strung, and I'm not talking about the line lb. test. 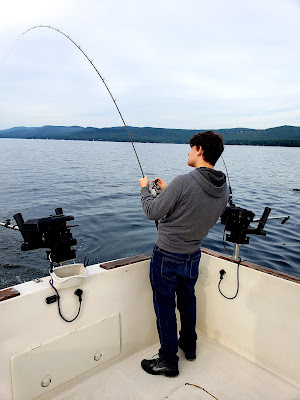 Had an interesting fishing experience up at Lake George. It was my first time up there, and a family trip where I couldn't disappear fishing every day, so I left my boat and yak at home, and booked a short morning trip for Danny, my brother Doug and I. It was definitely one of the more "interesting" trips I've booked (and I've fished with tons of captains and guides). A week and a half before the trip, at the height of the tourist season, you kinda get who you can get, and most everyone seems to run the same trips anyway. I'd had a recommendation from a friend, but of course he was booked through September. I spoke with our guide whom I found on Google, letting him know that we didn't mind trolling downriggers for a while early, but if it was slow, would much rather just switch over to targeting smallmouth. The day arrives and my son Dan and I meet my brother Doug around 6:30ish at the dock. The 7:00am departure times arrives, and our guy is not there. That's pretty damned annoying to say the least. I could see at his 7:05 arrival that the "plan" was a non-starter, as the only rods he had were trolling setups, and a look at his chart plotter on the way out confirmed he hadn't altered his routine in God knows how long. Run to one spot, troll, run back. A little chatter on the way out was not in his wheelhouse, but we were fishing soon enough, and he did know what he was doing. Pretty soon a rod went off, and so did the captain. Not sure if he was over caffeinated or just naturally high strung, but I about jumped out of my skin as he let out a high pitched, "fish on!" From the reaction, one might think that a school of yellowfin had hit every rod in our spread. He coached Danny who landed the first lake trout of the day, and the process repeated itself often enough to keep us busy. I let Danny and Doug take most of the fish, as frankly I was more entertained by the manic scenes than catching 20" lake trout. I even watched a few rod tips go and just sat, waiting to see how long it would take for the others to notice and the hilarity to ensue. In the end, I couldn't really complain as we all caught some fish, had a decent time, and a really good laugh about the entire experience over a late breakfast when we returned.